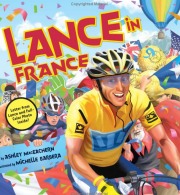 Cover of Lance in France by
Ashley Maceachern.

Lance Armstrong is coming to the Wordstock Festival.

Well, OK, not really. But Lance fans (especially little ones) still have a reason to get excited about Wordstock.

That’s because local author Ashley Maceachern tells us she’ll be a featured author. Ashley is a friend of Lance’s and a former Nike executive who has written Lance in France, a children’s book (with fun illustrations by Michelle Barbera) that follows Lance through the adventures of the Tour de France.

Kirkus Reviews said the book, “succeeds on many levels with a giddy warmth that is both inspirational and a great ride.”

Maceachern will read from the book on Sunday at the Oregon Convention Center (2:00 pm in Exhibit Hall D). She’ll also speak about the inspiration for the book and a Q & A and book-signing session will follow.

Learn more about the book at Powells.com.

Wow, too bad my wife and I will be racing cross at PIR. We have this book and it would be neat to get it autographed for our son, as we read it to him at bed time. There’s not much to the story line, but it’s a fun picture book.

Cheat to win? Is that the moral we want to be teaching to our kids? 🙂

cheat? did i miss something?