The “Laughs Last” section on the back page of Portland Monthly magazine’s October issue features an eye-catching illustration (see it below).

It’s a make-believe movie poster for Collision Course, which is “Coming this Halloween to a Theater Near You” and stars “Bikers vs. Cars”.

Under the movie title is the tagline:

“Feel the spine-snapping suspense as two-wheeled warriors challenge horsepower-mad mutants for the right-of-way. Will anyone survive?”

The focus of the illustration are two figures, one of them a drooling beast lunging from its car, with spikes on its knuckles and cell phones dangling from its hulking shoulders. An outsretched arm is raised menacingly in the direction of the other figure.

The other figure is astride a bicycle that has been shattered by the car’s grill. The warrior-like figure on the bike has it’s arms raised with wheels-turned-weapons, knives protruding from the tires.

Then, set against a red background of what looks like it could be splatterings of blood are the words, “Filmed on the streets of Portland!” 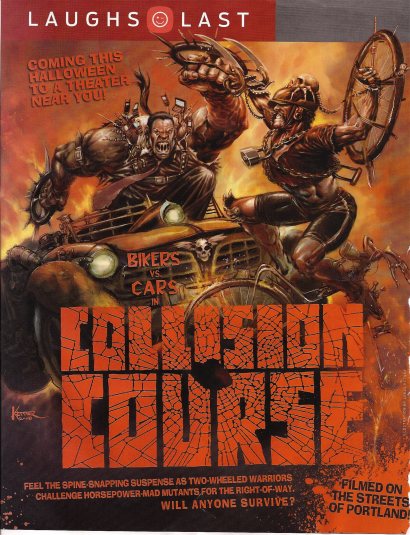 Illustration by Lukas Ketner that appears on p. 208 of the October 2008 issue of Portland Monthly Magazine.

It’s important to note that magazines like this work on a 3-4 month lead time. My hunch is that this illustration was inspired by the frenzy over a series of bike/car road-rage stories that were sensationalized by the Oregonian back in July.

In a strange twist, the artist Lukas Ketner who created this illustration, works a few doors down from me. I just asked him about it and he confirmed my hunch. He said that the magazine contacted him with the “bikes vs. cars” movie poster spoof idea.

It’s an amazing drawing and I really like Ketner’s work (check out this Obama illustration), but I’m having trouble finding the humor or entertainment value in this illustration. But maybe it’s me. I’m admittedly over-sensitive to this sort of thing.

What do you think about it?

The detail is amazing – I love the cell phones hanging off the driver.

Take a closer look: the car-warrior is huge, bulky; the bike-warrior is trim and muscular.

The car-warrior has steering wheels for weapons, the bike-warrior has a spiked wheel and knives on handlebars. Plus, bonus weapons for the biker, chain lock and u-lock!

The car-warrior is shackled by his cell phones and pda, which must make it hard to concentrate on the wily bike-warrior.

As defense, the bike-warrior has a helmet with a skull on it. Cool.

Apparently, he doesn’t have any feet, though… his feet are a part of the bike. But check out his abs, those calves…

But then again, people tell me I have a warped sense of humor sometimes.

Wait… is that Rev Phil?

It’s great to see a media outlet making fun of mind-boggling “bikes vs. cars” sensationalism rather than perpetuating it. Nice job, Portland Monthly! What a fun and creative response to the hype that peaked earlier this year.

I have to admit, the details are excellent. The colour scheme evokes a mood of desolation, despair and dystopian imagery.

Beside that, it thumbs the nose of the media, that have made so much derisiveness regarding this subject.

Yeah, maybe a wee bit sensitive J. I think it’s hilarious and it’s *satirizing* the ridiculousness of the car vs bike headlines , which I think is a good thing. Kinda like The Daily Show.

I think most people can appreciate irony and satire.

ok, great to read comments (from people I know and respect in the off-line world) that it is just me being overly-sensitive.

i need to relax a little i guess.

I do like the image and it’s cool to know such a talented artist like Ketner is working a few doors down from me.

Jonathan, I’m with you. I find it disturbing. The art is well done, but even if it is intended to be satire, the results of true car-bike conflicts are usually nothing to laugh about. I don’t like slasher movies either, so it could just be me.

A little bit of time, some $$ and I could get a bike mounted AIM 9M (Sidewinder Missle) attached to MK VII, and I’ve already got a LAWs Rocket Launch tube (used)… I could whip up a lot of rocket powered toys. 😉

Now if I could only get the Type-10 Phasers operational. Brother can you spare some antimatter?

Pretty cool. The motorist/smoker is definitely portrayed as a mutant and as the offender… foaming at the mouth, while the cyclists definitely is portrayed as the defender, and as a human. Love the cell phones n crackberry on the driver.

Looks like I need to make a new helmet! The skulls motif will do wonders for my inter-commuter relations.

Gorgeous illustration! And whether intentionally or not, it does underscore the silliness of the notion that a cyclist can pose any real threat to someone in a car. Because – as is clearly illustrated – in order for this to in any way resemble a fair fight, a driver has to lean his hulking torso out his windshield and turn the conflict into a fistfight.

But cars vs. bikes? A war? That’s like a mortar barrage vs. a switchblade.

Now, this picture obviously isn’t taking the “war” meme all that seriously. But the Oregonian was last summer, and they were pushing it like crazy. It had me worried, because any road-rager who had it in his head that there was a war on would feel that much more justified threatening a cyclist with his four-wheeled deadly weapon.

I was riding up N. Williams last August, and an SUV full of guys veered into the bike lane in front of me, pinching a cyclist in the narrow space between their vehicle and parked cars to the right. There was no contact, they just talked smack at the cyclist and then drove off, but it could’ve been really bad. And as they drove off, I thought to myself, “thanks, Oregonian.”

sweet, its a battle out there! 🙂

I think this bicycle would be more than capable of handling most cars:

BTW, the original “Collision Course” starred Jay Leno as a Detroit Police detective and Pat Morita as a police detective from Japan investigating industrial espionage. It was a cop story / comedy that only saw the light of day because Leno had just taken over The Tonight Show from Carson.

It’s a realistic a depiction of Detroit as “The Hunted” is of Portland – wickedly funny for locals due to the many inaccuracies.

Haw! Love it! Someday I will put little car silluettes on my bike to tally the ones I’ve successfully ricocheted from.

Great art! I think it’s Terry Parker in the car.

I’ll admit that I’m messed up, but I think it is funny too.

It is a great illustration. But I must admit that it didn’t tickle my funny bone.

I think it would’ve been fine during the height of the media frenzy but when I think car vs. bike this week, I am kind of fixated on what happened last year at this time.

Please don’t read this as a knock of the Portland Monthly, I truly doubt the timing of coinciding with the anniversary last year’s tragedy of tragic was on their radar. And, feel free to label me as oversensitive if you must but it is what it is…

Kudos to Matt Davis for his gravitas..it still makes me laugh months later…

I’m overly sensitive about being flattened by a car, but I love the poster.

I immediately thought, Hey! Put it up at a theater and sell tickets – maniac car drivers through this door, and bicyclist warriors through that one, everyone in fannish apocalyptic costumes, chanting for their respective side! Still no movie, just lock the doors and let them sort it out for two hours.

I don’t care how many weapons I have, the car will alway crush my tiny ass.

Trust me, this resembles Portland Maine more. That said, it is pretty funny. I’m a recent transplant and am amazed at how well the bike culture here has permeated the whole consciousness. Bicycling here is great!