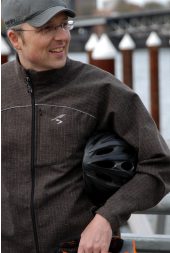 I may not be at Interbike (the big bike industry trade show going on right now in Las Vegas), but I’m still looking to share as much as I can from local companies who are at the show (read my story from last week for what other local professionals and companies are doing in Vegas).

On that note, I just heard from Ed Dalton, co-President of Portland-based Showers Pass.

Since he took over the company (it was originally founded in 1998 in Arcata, California) in 2005, Dalton has overseen a major revamp of the brand and the product line. 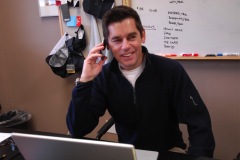 Dalton’s experience in the shoe industry — he consulted for companies like Timberland, Doc Martens, and Columbia Sportswear — has served him well in the bike jacket business. In 2006, Showers Pass garnered a “Product of the Year” nod from Outside Magazine and the jackets have also been featured in the New York Times. 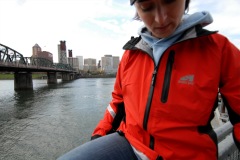 Major media exposure and sales growth have continued for Showers Pass (they’re nearly ubiquitous on some Portland rides) and now Dalton is branching out into “lifestyle pieces,” that he says are designed to work as well off-the-bike as they do on-the-bike.

The new collection — which includes the “Portland Jacket” and “Portland Cap” — will be shown at Interbike’s Urban Legend Fashion & Art Show this Thursday.

I got a sneak peak at these jackets when they were still in development and I was very impressed. With a tail-flap that snaps up and hides when not in use, loads of reflective pinstriping, and a fabric that is “nearly waterproof”, Dalton and co-President Kyle Ranson have a winner on their hands.

Showers Pass recently moved their headquarters from a cramped office in Portland’s West Hills (off Scholls Ferry Road) to a much larger building in inner Southeast. This is definitely a local company to keep an eye on.

What does “nearly waterproof” do for me? When can I have a jacket that:

1) Keeps water out; while also

2) Doesn’t cause me to soak through inside from sweat: and

peejay.. the showers pass stuff will keep the water out… “waterproof” would mean that you could stand under a waterfall for a few hours and not have anything come through… that’s just impossible for fabric that is also breathable.

as for 2) i think most folks that own a showers pass jacket would say they’ve got some of the most breathable/water-resistant jackets out there.

Waterproof and breathable is a myth, you can only really have one or the other.

I wonder if the Portland products are made in Portland?

(Wait,I think I know the answer to the question… )

I am soon ordering my 2nd DR. Doom Jacket. Handmade with love in Mancos, Colorado.

Want one for yourself?

“I wonder if the Portland products are made in Portland?”

however, with their recent move, I’ve heard Dalton say he’s considering making some products (like the cap perhaps) in-house.

Any idea when the new stuff will be available locally? Definitely need a new jacket, and would like to check them out.

My wife was raised in Mancos, she’d be thrilled to hear that there is some bike related business going on there.

that’d be a question for Mr. Dalton. I can do a more in-depth story on them next month.. I’ve been meaning to visit their new space.

what I can add now is that Dalton worked previously as a consultant to several shoe companies and it was his job to find the best factories and sources for their materials and production…so my assumption is that he uses “good” factories… but that’s just my assumption.

My Showers Pass jacket says “Made in China,” and cost me about the same as the “Made in the USA” Burley jackets used to cost. Oh, well. FWIW, it’s pretty waterproof and not too sweaty to wear.

Local company picks up where Burley left off

That story touched off quite a discussion and Ed Dalton himself came in to comment. Here’s what he said:

“When Showers Pass began in 1997, all of our products were produced in Arcata, Calif. We had since lost our ability to produce in that factory due to a large military contract. We have now partnered with a high standard manufacturers in Asia. Personally, I have developed, worked with and sourced footwear, and now apparel, for over 20 years in Asia for companies such as New Balance, Timberland, Red Wing Shoe Co., Cutter & Buck and Columbia Sportswear all under the highest standards and practices guidelines with regard to human rights, the environment, fair wages and clean and safe working conditions. We could always find the lowest priced factories and make greater margins, but we instead work with factories that follow strict guidelines with regard to their employees and do so with pride. Fair treatment of their workers is of utmost importance to them. Our factories treat their employees well and with respect. Their work force is well paid and cared for with good benefits and training. Our mission is to provide the cycling community with the best fitting, highest quality products for a fair price manufactured in a responsible manner.

As someone who has spoken with Ed and is familiar with Showers Pass and other bike-specific rainwear (I’m the lead purchaser at Citybikes), Let me say this:

Based on my extensive research, I believe there is almost NO ONE making quality “outdoor” fabric IN the US anymore. To manufacture such fabric here would render most garments made from it unaffordable for all but the wealthiest bike enthusiasts. (That reality is one of the reasons why Burley decided to stop making rainwear.)

Even the US-based “custom” bike garment makers (and messenger bag makers, for that matter, since Portland is home to several) are getting fabric that was made Somewhere Else, so don’t take them to task too harshly.

In the present environment — a global economy combined with the American public’s demand for “cheap” and/or “affordable” stuff — the only clear alternative is to weave your own fabric, and unless you’re raising your own sheep and spinning the wool yourself, well, good luck with all that.

Awesome. I’ve held off on buying a Showers Pass Touring jacket because I heard this line was coming at Interbike. I’m more of an urban/commuting cyclist here in Connecticut, so I’m more in the market for a commuter type jacket than say the Elite. Up until now, the Touring jacket was my target.

I’ll be very interested to see the features, material, performance, cut, zippers, etc. of the Portland jacket. The dark brown color isn’t very attractive to me for visibility’s sake, and who knows, the Touring Jacket still may be a better match for me. But I’m glad the options are expanding for someone like me.

More shots, description, and a review would be appreciated.

Tom from the ORbike team will be at Interbike and checking in with the ORbike blog as much as he can (tearing himself away from the Interbike fun won’t be easy… the latest gear… fun people…). Stay tuned to Blog.ORbike.com for reports.

It’s true that there is almost no US-made outdoor fabric anymore, but that is no excuse for not sewing and finishing the jackets in this country.

I am still waiting for the teeny-tiny Showers Pass jacket for my riding mascot that I proposed they make last year:

Thanks for the article. I’m happy with my summer weight Showers Pass jacket. So much so that, along with my experience and on the recommendation of a cycling buddy, I bought a slightly heavier weight jacket (not the Elite) I plan on wearing this winter.

As far as the manufacturing process goes, I try to buy “American made” whenever I can and buy from responsible companies as much as I can the rest of the time.

Interestingly, Showers Pass’s website’s home page and “About” pages indicate they are based in California. “Showers Pass is in the mountains about 20 miles inland from Eureka, CA.” Their contact info lists a Portland address, however. Time to update your content, guys.

I’ve always been under the impression that Shower Pass’ product line was a knock-off of the Burley line. When Burley’s apparel went away, it appears that they simply took the pattern for the Burley rain jacket and produced their own; even replicating the colors. This new line shows that they have moved beyond that stage and it’s exciting to see them innovate.

Damn. I used to raise sheep 10 years ago here in Oregon. Bet I could make a killing now that everyone wants local. Back in the day.. couldn’t get 10 cents a pound for spun wool.

Why such a dull color? And why are so many cyclists so stupid as to wear near-invisible earth tones to ride in traffic?
Do all of these morons really want to get
run over?

Re: #20
Guess we couldn’t have a thread about bike clothes without a response like that. Honestly, I was expecting that reaction as post 2.

Dang. I meant comment #21 (the one talking about “dull color”.

I’d rather go to the store sans day-glo from time to time. Might get looked at like a human though….