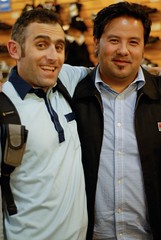 Chris King’s marketing director Chris
Distefano (L) and Jay Sycip at an event
in Portland back in May.
(Photos © J. Maus)

Sycip will work as a product manager for the company, but he’s also being hired to help Mr. Chris King revive Cielo Cycles, a framebuilding brand he created three decades ago.

The hire is a coup for Chris King and for Portland.

“What better time to move to Portland than at the start of the cyclocross season. I’m very excited to be here.”
— Jay Sycip

Sycip brings to town 17 years of experience at SyCip Designs, the Santa Rosa, California-based company founded by he and his brother Jeremy in 1992. SyCip Designs has a glowing reputation in the bike industry as a vibrant company whose bicycles combine an impeccable sense of style, craftsmanship, and whimsy. 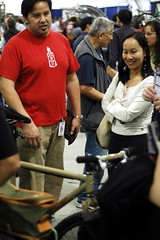 In a statement released by Chris King over the weekend, Sycip said, “It’s an incredible feeling to join this company and to bring my family to Portland. And what better time to move to Portland than at the start of the cyclocross season. I’m very excited to be here.”

According to Chris King’s marketing director Chris Distefano, this was a perfect opportunity for both parties. “It’s one those things,” he told me via phone Sunday afternoon, “where the timing just worked out. Jay wanted to move up here, and we were looking for someone just like him.” 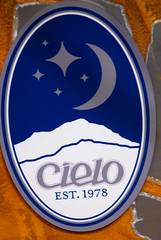 Sycip has been interested in moving to Portland since at least March of 2007, when I reported rumors of it from the North American Handmade Bicycle Show in San Jose. Sycip already has family and friends in Portland (his wife is from here) and the times I’ve seen him here and talked to him since, I could tell he loved the local vibe.

For all you SyCip fans out there, you can rest assured that SyCip Designs is still going strong under the able leadership of Jay’s brother Jeremy.

If you’re not familiar with SyCip’s style, I think you’ll see by the photos below that he’ll have no trouble fitting in in Portland… 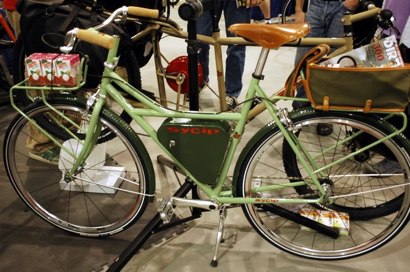 When I combine Sycip’s blend of style and function with the innovative engineering brilliance and business success of Mr. Chris King, I can only imagine what lies ahead.

Very cool! With his innovative/creative bike craftsmanship (and his love for bikes), Jay is certainly a great addition to Chris King and to Portland.

Wow what a Team, yes my SyCip would be nude without its CK headset 😉

My mtn bike is graced with both King and Sycip logos. Beautiful stuff, happy we\’re gaining Jay\’s experience & talent up here in PDX.

Sweet move on the part of Chris King and Jay Sycip. If the Java Boy wasn\’t made with Portland in mind, I\’d be surprised. I look forward to seeing what\’s gonna come out of this partnership.

First King is getting into bottom brackets, and now whole production frames. How long until we have a fully portland-made regular production bike?