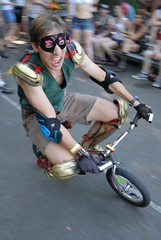 Those who were brave enough to confront the freakishly hot weather at the Multnomah County Bike Fair on Saturday, were rewarded with a fun and fitting end to Pedalpalooza.

While some were happy to enjoy the two-wheeled ambiance with a nap in the shade, others carried on in the grand MCBF tradition of beer, bikes, dancing, and, like the sign says, “All bike fun, all the time.”

After perusing the expo for a cheap helmet, a free bike tune-up, a cap by Shaun Deller, or a cool, pedal-powered smoothie, most folks ended up watching (or being part of) the bike action. 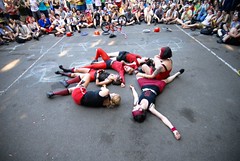 The B:C:Clettes laid it all out
during their performance.

In between bike jousts and general silliness, we danced to live music by The Spokes, The Golden Greats, and Chervona (they got the crowd dancing like crazy). Speaking of dancing, the B:C: Clettes (from Vancouver, BC), the Sprockettes, and Chain Reaction displayed their dynamic bike-crobatics for an appreciative crowd.

See more of the action, and the people who made it all happen, in my MCBF 2008 slideshow below (or go straight to the gallery).

[Note: After MCBF, the Sprockettes hosted their ‘Bicycle Bash’. I’ll have more about that later, but you can get a sneak peek of my photos here.]

The truth is: cyclists are smarter, sexier, and sillier than everybody else, and we deserve to celebrate this fact. Go Pedalpalooza, go bikes!

Thanks for the memories, people! Cya soon.

Epic day! Thanks shift for doing it big and giving everyone a great place to roast themselves. Next time lets have a new game called melted tire on black pavement surpise, well replace it with the utterly non-moving slow race…. ( damn fixies ). It\’s days like that, that make me relize portland is one big huge family & that the bike cummunity is really makeing an impact on everyday lifestyles. Great coverage John!

Thank you Jonathan for being the best reporter in town!

Great pictures! You have a great style and manage better yourself all the time.

To all the other people with cameras: learn with Jonathan, and be part of the action. You need to participate and share… Voyeurism isn\’t very appreciated, so expect more debris and water coming your way next year…

To everyone who participated: I LOVE YOU ALL!

Thanks to all of our volunteers & Pyramid for the beer.

Props also to the 7 city, state & county agencies who regulate on the Fair for staying home.