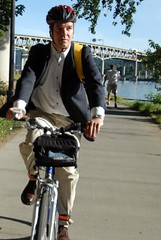 Yesterday, after the final day of programs at the Carfree Conference, I took a ride on the riverfront with Gil Penalosa (we were joined by Ian Stude, transportation options coordinator at Portland State University).

Penalosa was Bogota, Colombia’s parks commissioner when that city underwent a massive urban transformation and he is now sought worldwide for his expertise on how to create vibrant and successful public spaces. He has also observed the bikeways and urban design of many cities throughout the world (for more, read this bio).

We rode from PSU, over the Hawthorne Bridge, then north on the Eastbank Esplanade to the Steel Bridge.

“I find it amazing that there is so much conflict between bicyclists and pedestrians. We should be best friends.”

Penalosa — dressed in a coat and slacks — rode at a snail’s pace, snapping photos and stopping to observe things along the way.

As we rode, he directed a steady stream of questions at Ian Stude and I. It was as if he was trying to create a mental inventory, going down a checklist of things that would help him better understand the context of bicycling and public spaces in our city.

He wanted to know: if congestion on the Hawthorne and Esplanade paths was an issue (it is), when the Esplanade was built, why it was so narrow, if we allow drive-thrus (he said some cities have banned them), what kind of mayor Sam Adams will be, what the bike mode share is at PSU, whether or not the students get a parking subsidy, were homeless people a problem, was bike theft a problem, and so on.

At the end of our ride, I asked him about his impressions of the Eastbank Esplanade and about the perils of mixing bikes and pedestrians on such a high-volume facility.

Watch the short interview below:

For more on sharing the path with pedestrians, read Elly Blue’s article from December, 2006 — Passing etiquette: In defense of the bike bell.

Gil is bril. I love this guy!

\”we should be best friends.\”

I bike and walk, and I have to say, when I\’m walking, my right of way is disrespected as much by cyclists as it is by motorists.

If its not safe for children or the elderly, as he says, it\’s not safe, and that\’s not promising for encouraging a car-free lifestyle.

re the Esplanade, isn\’t it time for the chain link fence along I-5 to be replaced with a sound absorbing barrier?
My wife is a slow cyclist, and she will not ride on the Esplanade or Springwater along the Willamette.
As Gil made clear on Tuesday, Portland has a long way to go to reach the \”Big Leagues,\” the World Cup of bike/ped friendly cities.

Yeah, I hope people with power are listening to this guy. I would really like to see the widening and separate bike & ped facilities he talks about along the Esplanade and the Springwater along the Willamette. Both of these get quite crowded on nice weekends and afternoons.

I listened to Gil\’s keynote address and he really makes sense. Portland does have a long way to go, and we can help by trying to keep the conflict between us under control. Smile, slow down around peds, and engage in conversation, if you have the time. If you\’re late for an appointment, leave earlier next time. I really look forward to how Portland will manage the changes that are coming – it\’s exciting, challenging, and I find much-needed hope from this city. Thanks again Jonathan – great capture!

Jonathan,
thanks for the great coverage. I had hoped to attend the conference but was only able to be there part of one day. I really wanted to hear Gil speak so the video clip on the Esplanade is so appreciated.

What an inspiration. I\’m glad he questions the walker/biker conflict here. It\’s something for us all to think about.

Thanks for sharing that clip Jonathan. I could sit and listen to him all day.=)

He makes a great point about the pedestrians. I have tried to walk sections of the springwater trail and it\’s kind of like if pedestrians had to walk in the lane of traffic instead of a sidewalk. I remember one event walking wtih 2 kids, 2 dogs, an elderly woman, a pregnant woman and a stroller one sunny Sunday going over the 99E overpass. Every 2 minutes cyclists who appeared to be training for the tour de france or something, would come speeding by and it was incredibly stressful trying to keep our entourage out of their way. If they had to slow down even a bit they would shoot us dirty looks. You\’d think that cyclists would be more sympathetic considering the relationship between bycicles and cars. But it seems that same relationship exists between pedestrians and bicycles. The victim becomes the bully.

I think the analogy that cars are to cyclists is what cyclists are to pedestrians is a little far-fetched. Sure there may be some problems but how often (yes, it has happened) do cyclists kill pedestrians? Separated lanes are important but it is seems just as unlikely that cyclists won\’t try to pass pedestrians as that cars won\’t try to pass cyclists. The difference is that when riding on roads cyclists try to stay in the right lane if not the right side of the right lane while Pedestrians tend to just take up full paths even when they are marked for bikes. Cyclists often need to be less aggressive but pedestrians do need to be more aware… and yes, we should be friends.

\”how often (yes, it has happened) do cyclists kill pedestrians?\”

That is a good point. In our case, we were staying to the right, but it\’s not that wide of a path and there was a toddler with us. Now, I am very pro the idea of good parents keep their kids out of danger and making them behave in public, but with a 2-3 year old, there are limits to how far I can go with this. So my question then is, does this community think it\’s inappropriate to allow a 2 or 3 year old child to walk with an adult on the springwater trail? Does the child\’s hand need to be held the entire time? (If you say yes, you don\’t own a 2 year old. Across the street, or a parking lot, fine, but for a mile walk?) If not, where would it be safer, easier to walk with a 2 or 3 year old? Most hiking trails around here are too hilly for a little guy to go very far and the beauty of the springwater is it that we can get to it without getting in our car. I\’m just asking these questions to ask this community to think about how trails and facilities can be shared and what this city needs to accomodate the many different ways of getting around.

My son is 13 now and will not let me touch him in Public much less hold his hand, but when he was three I probably would not have let him walk on the eastbank esplanade/willamette without contact or in a stroller. Kids that age are all movement and little sense, and however slow I am biking (and I admit I like to move on the springwater, but kids and the elderley I will slow down for) a small child has managed to dart directly in front of me- the first nice day this spring I ended up almost falling off my bike from a walking speed due to a toddler. Not hurting children is pretty important to me, but I have to say that I was pretty irritated that the parent with the child (the Dad I am guessing) was not paying any attention to what the kid was doing.

We are all looking for different expierences in our shared urban spaces. Along the esplanade I like the people watching and variety and crowds- the urban density. But the springwater is where I can open up mu bike and body and not worry about cars, lights, my work my day. There I will avoid peds, but I really wish that they would stay to the right…

I was walking with my two sons on the Esplanade a couple of weeks ago.

My youngest son, age 7, was standing still at the river edge of the path where it is fairly wide near the Steel bridge, with nothing blocking the rest of the width of the path.

A middle-aged seasoned-looking (had all the cycling garb, and not shiny new stuff) cyclist barreled through at high speed one foot behind him, and he turned at the sudden noise he heard behind him (general ambient noise masked the sound of the cyclist approaching).

I barely had time to shout at my son to watch out as I saw the cyclist pass him so close. It happened so fast the cyclist was gone before I gathered my thoughts, and I was relieved that he hadn\’t just collided with my son.

But the lack of common sense and courtesy displayed by the cyclist was inexcusable. Now, there were many cyclists on the esplanade that day, and only this one man showed the amazing lack of concern for fellow human\’s safety (and his own, really).

I see no difference between this and a car blowing quickly past a bike at close range. Both are horrifyingly unsafe and very, very wrong.

I will note that the numerous other cyclists on the esplanade that day all showed appropriate respect and courtesy to the others on the path, and with a few troubling exceptions, that has been my normal experience, so I know that the large majority of cyclists are not the problem.

Ugh — I should have proofread my entry, and I see no way to edit it after I accidentally hit the post button. Sorry for the mistakes — hopefully my point was clear. Cycle on (safely)!