The mix of attendees at today’s press conference illustrated one of the main reasons Portland has catapulted above all other American cities on its way to achieving Platinum. We have stitched together a diverse coalition of activists, agencies, companies, advocates and organizations — all working together to move biking forward.

The first speaker at the podium today was Diane Chalmers, Vice President of Chris King Precision Components. She said they relocated their business from Redding, California to Portland precisely because we hold biking in such high regard. 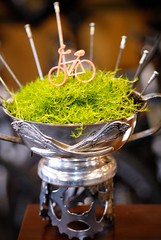 Police Chief Rose Sizer — who showed up with her Assistant Chief and the Commander of the Traffic Divsion — spoke about how pleased she has been with the sense of partnership between her officers and the community.

Scott Bricker, the Executive Director of the Bicycle Transportation Alliance, said the accomplishment is far from the pinnacle of our potential. “This is base camp Platinum…like being a first-degree black belt.”

David Bragdon, Metro (a regional planning agency) Council President, spoke of Portland’s commitment to bike facilities as an essential hub that will someday connect downtown to destinations all over the region in a seamless network of paths and trails.

Oregon State Senator Ginny Burdick spoke of how Portland is helping to push the envelope of bike-friendly legislation down in Salem. 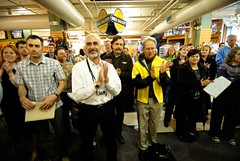 Also on a statewide note, Oregon Transportation Commission Chair Gail Achterman said Platinum is not just important for Portland but “an important statement for our state.”

Speakers at the event credited a rich legacy of political and civic leadership for getting us to this point. In a press release on the award sent out by PDOT, city bicycle program coordinator Roger Geller said,

“We’re celebrating three decades of consistently applying policies that promote bicycling and our third consecutive year of double-digit growth in bicycle ridership in the city. Portland is doing everything we can with our limited resources to create safer conditions for cyclists. The job isn’t done.”

Portland’s work is unfinished, but this award is meant to recognize how far we’ve come and what it took to get here.

League of American Bicyclists’ Andy Clarke put it this way,

“Portland has had the courage to lead, to innovate, and to pursue a vision of their community that emphasizes choice, equity, and quality of life. Platinum status isn’t forever. We recognize that compared to other world-class cities for cycling, Portland still has a long way to go.” 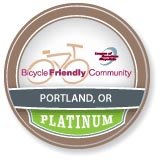 And with that, the League offered these recommendations for Portland to maintain its coveted Platinum ranking:

While infrastructure projects and city-backed programs tend to get most of the limelight, we can’t forget the tremendously active, creative, and effective grassroots activism and culture that has sprung up around bicycling in Portland.

From the streets to City Hall — here’s to Platinum. Now what’s next?

I congratulate all of us on our fair city\’s platinum status – it is deserved. I strongly caution us not to start believing our own good press too much, or for too long. Borrowing from the title of a Tracy Kidder book, There are still \”Mountains, Beyond Mountains\” – I\’ll pull for a bit as long as we each take a turn in front.

There is still work to be done. But let us now dance a silly dance of joy for where we were and where we are now. Horray! Congratulations Portland. Well deserved.

What\’s next? How about pushing for separated cycle tracks (maybe initially along major commuting routes) as we see in Copenhagen and the Netherlands? Would any other single policy do more to get the great number of \”interested but concerned\” riders out of cars and onto bikes?
Congrats to all the planners, politicians and interested bicyclists and organizations who\’ve worked so hard to take us this far. We need to keep expanding the current strategies (bike blvds etc) that have worked so well up till now. But to really achieve more than incremental change — to transform the city for the high-priced gas and climate-stressed future that\’s just ahead — we need to think dramatically bigger. Cycle tracks are one of the next big steps, because we know they work from the evidence of the cities that have built them. What\’s more valuable than platinum?

Indeed, a lot of people deserve a lot of thanks for a lot of hard work that it took to get here.

I\’m with brettoo, next should be cycle tracks along major commuting corridors.

I like the idea of separated cycle tracks, but I also think that we need to spend more time on the connectivity of communities in this region. While I haven\’t ridden some of these routes, I have heard people complain about the Milwaukie-Portland, Gresham-Portland, Beaverton-Portland, etc. connections. It also seems to me, from comments, that east of 82nd there is a lack of cycling facilities. I think we really need to start thinking about how we connect the greater metro area for bicycles. I would also say that, from both a recreational and commuter standpoint, we should work on areas like Hwy 30. Also, wasn\’t there something being kicked around about a LO -Portland bike path?

Anyways, thanks for everyone\’s hard work and I hope that we keep working hard for change.

This is very exciting!

I hope this is the cover story for the WW and Mercury this week.. I want to send some copies to my family. They still think I\’m crazy for using a bike as my only mode of transportation. ;p

I think there is something symbolic in the trophy having a green living component to it. We need to take care of it so that it grows, and does not die.

This makes me so proud to live in Portland.

It is really great that we have achieved the platinum award. It has taken a lot of work by many to get there. But as has been said we cannot rest on our laurels.
As for the first recommendation: Ensure better access to city parks and recreation areas for off-road riding. This is probably the weakest area that needs work. There are about 6 miles of singletrack trails on Powell Butte and only about a half mile in Forest Park available for those of us who ride singletrack trails. Those of us who ride singletrack are anxious to help multiply that amount. We look forward to making that dream a reality, so we can ride to ride close to home!

I am so proud of us. I am particularly proud that Portland\’s success has been led by many strong, capable and inspirational people – both men and women. I want to take a moment and recognize some of the women who helped get us to (base camp) Platinum.

These are just some of the women who rolled up their sleeves and made it happen. I am sure I am missing many of us…. Thanks for your continued hard work, encouragement, and commitment to bike fun. What\’s next?

it\’s great that women have made important contributions. But why the focus on gender? Is there a perception that men have garnered a disproportionate share of credit?

Well, where do you go from platinum? And what\’s with the sad-sack list of recommendations from the League? \”Strengthen ties to the police and enforcement community?\” \”Continue to innovate?\” How about, \’Continue to double ridership levels on an annual basis,\’ or \’increase the number and variety of ways to take bicycles onto mass transit.\” no wonder we got Platinum; if the League has such lowly dreams for tomorrow, we must look as good as it gets.

Sorry for my late repy to Curious – I\’m not saying that men have garnered more of the credit. In fact, Portland seems to be a beacon of light when it comes to women\’s leadership on bicycling.

Unfortunately, I have been to enough conferences, awards dinners, events, and meetings about bicycling where there were no or only one woman in the meeting or on stage. Bicycling has been traditionally a male dominated sport – but this is changing.

The last two issues of Adventure Cycling that came across my desk are filled with images of woman riding – and not just a story on women and riding. It is refreshing and important to see faces like mine represented.