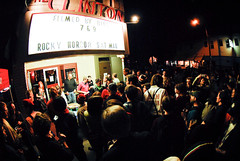 Both shows sold out tonight and
many were turned away.
Slideshow below
(Photos © J. Maus)

Like Portland’s version of the Oscar Awards (we need a red carpet next year), all the cycling stars came out tonight for the sixth annual Filmed by Bike.

Hundreds were turned away, but those who got in were treated to an eclectic and entertaining mix of films. My personal favorites were the Unicycle Zombies (with a surprise ending you’ll have to see to believe!), a film about a messenger named Puppy (was a real person?) and, of course, the Bicycle Alphabet (it was a sing-along, Yeah!).

Is this the official start of bike season? It sure seemed like it. Now I’m off to find the Midnight Mystery Ride, it should be huge tonight. 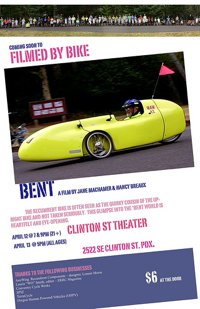 UPDATE: Saturday, 4/12 (6:30pm)
Tonight’s shows get underway in just a half-hour. The big buzz so far is the hoard of recumbents that have shown up. According to a phone call from event organizer Ayleen Crotty, they’ve been rolling up for over an hour already in anticipation of the world premiere of Bent.

The new film (check out the poster) by Jane Machamer and Nancy Breaux promises to be a “heartfelt and eye-opening glimpse” into ‘bent culture.

[Note: I can’t make tonight’s screenings, so if you were there, chime in below with how it went!]

Great show – Ayleen and crew did a spectacular job as always! Good luck with the rest of the weekend, hope all the shows are sold out!

Hey all – great show, as always. For me, this is the one \”can\’t-miss\” bike event all year; even before the show started I remembered why I never miss it. You guys rock.

I\’d like to offer an (admittedly selfish) critique: last year the show ended with that Ski Boys footage, which was so inspirational that everyone in my group was buzzing for hours afterwards. This year you left us with Bicycle Jerry and the Return of Easy Rider, which had everyone in my group staring into their beers and trying not to slit our wrists for the next few hours. I would never suggest that they should be left out of the program – I\’m just not sure I\’d have them as the closing shorts. Before the movie, we were all talking about meeting for the 5 show on Sunday; afterwards, nobody seemed very enthused. We all liked the rest of the program so much – I wonder if we had all just seen the ABC short if the conversation would have been different.

Of course, I\’m willing to admit that _not_ winning the Rapha jersey could have contributed to the mood. 😉

Oh! – And a big shout out to Team Beer for the great crowd control. Good job fellas!

Looks like it was a great event! It makes me wish I was in Portland rather than cloudy, rainy, snainy Central Indiana!

We arrived for the 7pm show Friday. We were the 1st of the line that could not get in as there was such a big turnout…oh well it looks like another lovely ride today in order to see the film!

I have to agree with poser\’s comment about ending the show with such dark films. It definitely quelled my mood after spending the whole evening anticipating and experiencing the high spirits of the whole scene. But upon riding home and thinking about the rest of the movies, which were great, I\’m ready for tonight\’s selections – including \”Bent\”. Let\’s just hope they turn up the volume a bit for us young/old folk!

PS – Jonathan, thanks for posting the pic!

I agree poser, and why the heck did the volume suck so bad? I really think a LOT was lost due to the barely audible sound. Pull it together Clinton St!

djkenny- thanks for giving up your spot for carolyn and myself… what an unselfish, uber-cool and tre-portland thing to do. We\’re going again tonight, I promise to give up my space if need be so the two of you can get in.
thanks again.
C U there…

no prob t-bird-
deb and I both were totally prepared for having to return if need be. having your beer-on and all, it seemed the right thing to do. having an excuse to get deb out on a(nother) ride is totally cool with me.:)
see ya in line!
djkenny

we got in! great show…I am going to shoot for the other movies tomorrow after work on my commute back at 7pm.
Thanks Ayleen and the others involved, it was a real hit.

\”Is this the official start of bike season?\”

Did bike season ever end?

Yes – the \’bent contingent had a great time last night and judging from the rest of theater, everyone else did, too! Jane and Nancy did a great job on \”Bent\”. Before the show we got alot of questions about the bikes, it was a lovely night to hang out and chat over an IPA.
It was cute in the last film of the show \”Let\’s All Ride Together\”; a whole bunch of folks come on one by one, on all flavors of bikes with the recumbent rider coming in at the end. They say \”That looks comfy\”, the \’bent rider says \”That doesn\’t!\” Funny, but really, whatever bike you ride is the Right Bike! Yes – let\’s all ride together!

Is there a way to get all the films? I bought the DVD\’s… and it seems some are missing. I couldnt make it last night/Sunday… and really wanted to see the 2nd series \”Pump it Up.

\”Pump It Up\” was magnificent but folks
should not miss Program 2 \”Bikers Win\” if you did not see it Friday night. Lots of great local color and creativity.

Oops Program 2 \”Bikers Win\” ran Saturday and Sunday nights… both programs are available on the DVD:

The sound at Clinton is awful, perhaps we should just make this a \’Silent Film Festival\’.

Poor sound aside it was a grand night!

As one of the filmmakers, I was downright offended by the poor projection quality. It appeared that the films had been re-digitized from their original formats, leaving many very pixelated and the titles unreadable. The sound was far too quiet, and with all the heckling no one could hear!

This was certainly the best selection of films I have seen at Filmed by Bike yet. But really, made it should be at the Bagdad next year? Cinema 21? Or can the Clinton just get it\’s set up together?

I make no apologies for heckling. That\’s what Filmed by Bike is all about. Well, especially at the Opening Night Throwdown. We don\’t call it a throwdown for nothin\’….

We\’re working on the sound and video quality for next year. It\’s one of our #1 goals. Filmed by Bike is run by me with some really awesome people helping on many fronts, but the sound and video aspect is one we really don\’t know much about. In the past it was no big deal, but now we\’re getting much better quality work and by the time we transfer to the master DVD for the program, we\’ve lost quality all around.

So I\’m looking for people who can point me in the right direction for next year. We\’re a small operation so we can\’t have it eat into the budget too much so I\’d love to find someone with skills to volunteer for trade and/or a charge a very low fee.

KUDOS to Matt Philips for creating our many compilations every year (for play at the theater and the for sale DVD – a ton of work).

Maybe the sucky sound was the filmmakers fault. Or all you loud ass Drunken Bikers screaming.

Keep talking shit about The Clinton, and maybe they will cancel your festival. Who else would host you?

Looks like the people in charge did crappy transfers, which is why the quality was not so good.