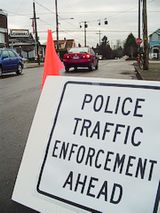 With new agreement; Police,
PDOT, and the BTA pledge to work
together on enforcement.
(Photos © J. Maus)

Back in October, the community was reeling with grief from the loss of two young Portlanders — killed while they rode their bikes on our city’s streets.

When Siobhan Doyle was hit and seriously injured just two weeks later at the exact same spot where one of those fatalities occurred, the situation reached a boiling point; the community coalesced for a rally and press conference on the steps of City Hall, PDOT pledged safety improvements, and the Transportation Commissioner held several emergency meetings.

One of those meetings, held on November 12th in City Hall, was called by Commissioner Sam Adams to discuss rising concerns over the Police Bureau’s communication methods and enforcement policies. 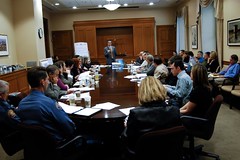 The idea for a Community Policing Agreement
was first brought up back in November.

It was the first time concerns about how the Police Bureau deals with bike crashes (both in the media and in their policies) had risen to a high enough level that Police Chief Rosie Sizer (and Assistant Chief Lynnae Berg) came to the table to listen and learn more about the issues.

It was in that meeting where Chief Sizer first agreed to draft a Community Policing Agreement.

I have been waiting four months to see that document, and yesterday, Traffic Division Captain Larry O’Dea finally sent me a draft.

I can’t publish the document yet (because it’s still a draft), but Capt. O’Dea gave me the green light to discuss the concepts and ideas it contains.

The Agreement (now in its second draft) will include three parties: the Police Bureau, the City of Portland Office of Transportation (PDOT), and the Bicycle Transportation Alliance (BTA). The format of the document is an introductory paragraph followed by a long list of actions that each party will commit to.

The opening paragraph talks about how traffic safety is a “shared responsibility” and that “a collaborative teamwork approach” is needed to improve traffic safety issues. It also lays out the goals and desires of each party — which is summed up as being a “fair education and enforcement strategy”. “Balanced approaches” to reaching goals — which include education, enforcement and engineering — are what the Agreement says is needed to improve the safety of all road users.

After the opening paragraph is a list of things each of the three organizations will do. It’s written like this: “The Police Bureau will…, The BTA will…, etc..”

Among the “wills” of the Police Bureau (and realize this is a draft) is some very encouraging language that includes: a willingness to work with PDOT to focus enforcement on high-risk areas; releasing information about crashes in “a neutral way”; having Traffic Division leaders regularly attend (and participate in) meetings that focus on bicycle issues; and making a stronger effort to promote information sharing between the community and the Police Bureau. 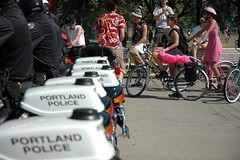 Along with reciprocating the responsibilities outlined by the PPB above, the list for PDOT includes: encouraging all road users to follow the laws for safety; sharing information with the PPB; and meeting monthly to check in with Traffic Division leaders.

The BTA responsibilities, as listed in the document, are essentially the same as PDOT’s; they include agreeing to work collaboratively with the other two parties, to support each other, and to share information.

At this point, it’s too early to tell how formal this agreement will be (I should know soon). But regardless of what official form it takes (a binding, City Council resolution perhaps?), I see this is a very important “Code of Conduct” between the community, PDOT and the Police Bureau that will give each of them leverage to make sure the other fulfills their responsibilities.

Once finalized, this document will be a significant step forward for traffic safety in Portland, and it’s yet another silver lining to a tragedy that impacted us all.

Ummm, why not? Do you hold some Top-Secret level clearance or something?

Seems like public feedback on the draft should be a welcome thing. The excerpts you have given sound more like a broad brushed Mission Statement than anything else.

Any idea as to how precise this will be and to what level of accountability it will be held? Basically, is this going to be a pile of feel good words, or a list of actionable goals and benchmarks?

This is a positive step in the right direction and could be a great model for a statewide approach to improving traffic safety for all road users.

Thanks for the coverage of this, Jonathan. This looks very promising.

“Balanced approaches” to reaching this GOA — which include education, enforcement and engineering \”…

I agree that public feedback on the document would be a good thing. Maybe I should have pressed Capt. O\’Dea more and insisted that he lets me publish it. However I think this is a significant and important step for a Bureau that is sincerely trying to make changes for better and I am inclined to give them breathing room to do so.

I know you don\’t like my reporting style in general around police issues and that you feel I should take more of an aggressive/bulldog reporter approach. I appreciate that, and I am trying to be more aggressive when necessary, but please be patient and trust that I feel I have a good sense of how these things play out.

I am not a traditional reporter, nor am I a traditional advocate. I am a strange hybrid — both part of the movement and trying to push it forward, while also trying to see the larger context, and then report on it objectively.

Back to your point about giving feedback on this document…

My story above really captures most of the main ideas that are included in it so far.

As for accountability… that is up to how it gets finalized and how each party holds the other to their stated responsibilities. Once it is final, I will learn more about it and report back what I hear.

Thanks for your comments.

Jonathan, keep up the good and valuable work. Your reporting is a true asset to cyclists in Portland.

You keep in the light of it all, keep up the great reporting, great work!
this site is such a HUB.

Thank you for this valuable update, Jonathan. You do an excellent job. It is much appreciated!

And more thanks from this side of the cosmos, Jonathan. We need you.

Thanks Jonathan – I think the fact that we\’ve had two police bureau-related stories in the last week that don\’t revolve around a death or an enforcement action indicates that the police are working to accommodate the community. I hope that all of us as citizens will work to hold them accountable, yet understand the restrictions and constraints under which the police operate.

That said, let\’s not get too warm and fuzzy about it until their actions match their words. An agreement is an important first step, but it\’s still only one step.

Until the public realizes that they will be held accountable for their actions, their actions will not change.

The big missing link is still the stick: sufficiently powerful legal deterrents for garden-variety dangerous driving. This will require citizen pressure and legislation to bring about. We will need to build a coalition pressure group that is not bike-centric and predominantly includes other user groups, including pedestrians, motorists, and other affected people who have been victims of dangerous drivers.