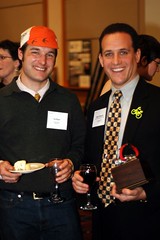 The Oregon Convention Center might have a hard time passing for any part of Paris, but that won’t stop the Bicycle Transportation Alliance (BTA) from trying. They’re just a few days away from their largest party and fundraiser of the year — the Alice Awards.

Since 1995, the BTA has honored bike heroes from across Oregon and southwest Washington at their annual gala and this year the theme is all about Paris. The BTA chose the Paris theme not just because Parisians know how to party (and look good doing it) but because of everything they’ve done lately to “make bicycling irresistible, including rental bikes and Sunday Parkways along the Seine.”

One highlight of the evening is always the Alice B. Toeclips Award ceremony. The list of nominees is impressive, but only five lucky bike advocates will come home with a coveted Alice (a classy pedal on a wooden pedestal). 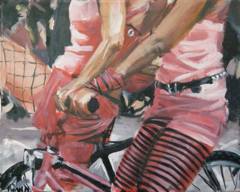 This cool Sprockettes painting by
Hazel Newlevant is one of many of this
year’s auction items.

Other folks will show up to gawk and bid on all the auction items. Up for bid will be a vast number of drool-worthy wares — everything from a one-of-a-kind painting of the Sprockettes to a bike tour in France’s Loire Valley.

Last year about 700 people showed up to the event, and it’s already sold out this time around.

For more info, check out AliceAwards.org.

You forgot to mention its also great party with on open wine bar!

Here\’s another cool thing up for bidding:

One full-day frame-building workshop for you and a friend. Taught by Sacha White, owner and builder of Vanilla Bicycles, the workshop will take you into the process of cutting, prepping, joining, and finishing various pieces of a steel bicycle frame.

This is a great opportunity for someone who already passionately incorporates the bike into their life: you\’ll get to go below the surface of paint, graphics, and components to gain an even deeper knowledge of the conception of a bicycle.

You’ll laugh (you might cry), you’ll play with power tools and blowtorches, you’ll go home with souvenirs from your metalworking exploits. Lunch and coffee with Sacha at some of Vanilla’s favorite spots are included.

The great news is that the Alice Awards and Auction are at 100% capacity!

The even better news is that we are now putting together a waitlist to match last minute requests with last minute cancellations.

For more information please contact me at the office. Email is best way to reach me.

Don\’t forget the raffle tickets! You want these. For a mere $10, you could stand to win 12 (count em) 12 $100 gift certificates to some of the hottest restaurants in town: DF, The Farm Cafe, Gino\’s Restaurant and Bar, Lauro Kitchen, Navarre, Nostrana, Olea, Paley\’s Place Bistro and Bar, Park Kitchen, Serratto, Vindalho, and Wildwood.

Go to the bta4bikes.org web site to purchase these gems….

If you can\’t get in make the tailgate party outside