This story is part of my ongoing coverage of the 2008 National Bike Summit. See the rest of my coverage here. [*Note: Unfortunately all my photos from this morning’s rally were lost in a technical glitch.] 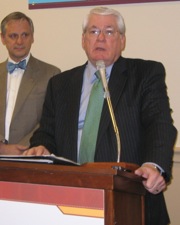 Just hours after news outlets reported that oil prices have hit an all-time record high, Congressman Earl Blumenauer and Dan Beard, the Chief Administrative Officer of the U.S. House of Representatives, announced a new bike-sharing program at a rally for the National Bike Summit on Capitol Hill this morning.

Dubbed “Wheels4Wellness,” the new program will initially place 30 bikes at three locations around the U.S. House offices on Capitol Hill and will be available for free to the House’s 7,000 DC-based employees. Beard also announced that a second phase of the program will extend the locations to major transit hubs, like the train station at L’Enfant Plaza which is a popular hub for Capitol Hill commuters.

Speaking in a packed room, Beard acknowledged that the program, “Is not Paris, trust me…,” but he said it will, “give our employees a new commuting option and also an opportunity to get some exercise during the day.”

Beard says they hope to have the program in place by Earth Day (April 22) and that “plan b” would be do have it ready by National Bike Week (May 31st).

“Bike-sharing…can give our employees an opportunity during the day to get some exercise, do some shopping, grab a quick lunch, do an errand, or just go on a ride around the Mall and enjoy the sights.”
— Dan Beard, Chief Administrative Officer of the House of Representatives

The details of the program are still being worked out. After the announcement Beard told me they’re still trying to decide the exact type of system they’ll use to access and return the bikes. Beard said he hopes the system can be integrated with an existing “QuickPay” payment card used for meals and other items on Capitol Hill that all employees already have. Another detail being worked out are making sure the bikes meet federal procurement laws that require the bikes to be American made.

Also giving his stamp of approval and speaking in support of the Wheels4Wellness program was the attending physician for the U.S. House of Representatives, the Senate, and the Supreme Court, Dr. John Eisold.

Unfortunately, my photos from this morning’s rally were lost in a technical glitch (some nice ones too!), but I did manage to get the audio from the bike-sharing announcement. Have a listen below…
[audio:beardBikeSharing.mp3]
(3 min, 17 sec – MP3)

This is fantastic. Hopefully this will show the rest of the country that this can work, but thirty bikes for 7,000 people?! I\’m sure if they reduced the number of parking spots by 100, they could buy enough bikes for the whole dang house. I\’ve read that on street \”free\” parking costs cities in excess of 1000 bucks a year (for the initial build costs and for maintenance).

I hope this spreads the good word.

hell yeah! let\’s give away more free bikes to those poor, disenfranchised, underpaid White House workers! let\’s give more novelties to people with a plethora of transportation options! the poor can WALK!

Solid gold, I think the point of the exercise is to get those people out of cars and onto bikes… or to explore other options of commuting besides cars.

Besides, it\’s not \”giving away bikes to those poor, disenfranchised, underpaid\” employees, it\’s setting up a bike-rental program (if I\’m reading it right).

It\’s a foot in the door, anyway, for bike rentals in a major American city.

I think the importance of this program is that it introduces bicycling as a reasonable option, an everyday option, for in-city shorter trips… to the top decision-makers in the nation, and their staff. Even if this comes out of taxpayer dollars, so what? You think we don\’t also fund fleet vehicles for them to drive on business? How many fleet automobiles do you thing are at the disposal of the U.S. House of Representatives and its staff?

This gives them another option for trips in-town, an option that may have them thinking slightly differently in 2009 when it\’s time to write the next surface transportation re-authorization bill.

Anything that get government workers onto bicycles is great. This means more folks in power have a greater understanding of the needs for bike safety awareness. It means giving folks an opportunity to use a bicycle for an errand. These folks just might go out and buy their own and then, hum, commute to their job?

Plain fact is that every little step counts! This is a small step in the right direction.

WOW great News, I still think we have some issues to work threw to coexist. * with autos. *

It should be noted that while this is a great step forward in greening the Capitol and promoting bikes as transportation among our elected officials, no one involved approached the local advocacy organization or any representative of Smart Bike DC, which is mere weeks away from launching. If the goal is to reach other transit options in the city, to have Congress not work with the current program and advocates of their host city is quite short sited.

Let\’s talk about some changes in law that could truly promote \”wheels for wellness.\” Several things drive continued car dependence by working people. Job requirements for punctuality and grooming, for example–how about forbidding employers from firing for either tardiness or failure to meet an appearance standard? Many people\’s work commute mode is driven by a need to arrive at a distant workplace on time and in an unruffled condition of appearance. Another thing–legislate fixed and finite limits to the selling or renting price of housing. High housing costs are another cause of the need to make long commutes–wasn\’t there a study that claimed housing prices decreased by \”$25K per offramp\” when measuring distances from central cities.
Public policy should FORCE the cost of housing down, the cost of driving up.

Maybe Congrass doesn\’t know about the current program or Smart Bike DC? Since cycling isn\’t really on the Congress\’ radar (until, hopefully, now), they might not have known that other groups are working on this same issue.