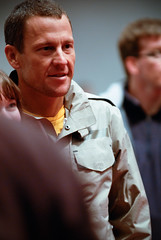 The national bike movement might have just found its most important (and famous) ally: Lance Armstrong.

After just bumping into Lance at the North American Handmade Bicycle Show held in Portland last weekend, I noticed a story published in his hometown newspaper today about the new “commuting bike shop” he plans to open.

And get this; the shop will focus on commuter bikes, not on high-end, carbon-fiber race machines he so heroically pedaled to seven Tour de France victories.

Yes, it sounds like Mr. Armstrong’s experience in Portland has helped turn him into a bona fide bike advocate.

Here’s a quote he gave Austin American-Statesman reporter Pam LeBlanc (who, incidentally has visited and reported extensively on Portland in the past):

“This city [Austin] is exploding downtown. Are all these people in high rises going to drive everywhere? We have to promote (bike) commuting.”

And here’s my favorite part of the article:

“Armstrong said he’d like to see Austin evolve into a place like Portland, Ore., where biking is part of the culture and people pedal to work, to restaurants and to run errands. “Walk outside, and the streets are lined with bikes — because they have a safe place to ride,” Armstrong said of the city long known for its bicycle-friendly amenities and policies.”

No word yet from the League of American Bicyclists on whether he’ll speak at the upcoming National Bike Summit (but I have a feeling he’ll be getting an invite!).

Thank You Lance. what a great change.

I\’d like to see Portland evolve into a place where there\’s always a safe place to ride.

I dont know safe is going to get any better
anywhere, On my ride home in the morning
working Grave shift all night, I had a tractor pull almost right into in the bike lane on me, some would have hit it, with its big scoop front taking my head off.

another day in the life of a cyclist, we
just live to ride, sometimes riding to live, almost every ride has some weird
deal these days. why? USA thinks cars are kings.

The effect he could have on the bicycle industry could be huge. If only Micheal Jordon could have used his power for good, instead of selling underwear.

Very interesting. I hope Lance can change my mind about his influence.

Armstrong is now a millionnaire businessman…he most likely views this as a good investment with a business model to follow. He\’s also politically savy…the combination of the two could be a good thing for those in Austin willing to join him.

he also could have just said it for sound bites and interview time…who knows.

Qwendolyn…you\’re in a place that is about as good as it gets in this country..cycling is inherently risky…period.

It could be better in Portland, but the good news is that the trend is towards it getting better.

Even more importantly, the political elite is going to bat for bicycle and pedestrian causes, and the conventional wisdom in Portland is that bikes are a good thing, even among those who don\’t ride.

*That* is why it\’s great to be here. Almost no other place has that combination of things going for it. Even Austin, which has a pretty good bike community, is losing ground each year instead of gaining. Largely because a majority of the citizenry is openly hostile to bike/ped improvements, and the politicians — even \”progressive\” ones — are no help.

Sweet, if I can top off my HCT count every few weeks, getting to work\’ll be a breeze.

I see you in Portland complaining about how dangerous riding there is, and I compare it to bike commuter stats here in TX (A Dallas Co. bike commuter has a 1 in 1 chance of serious injury by his second year of commuting, i.e. it isn\’t a matter of \”if\” but \”when\” you suffer a crash that sends you to the hospital). My trip was on 08/31/2001. At one time 10% of the congregation of my church was in rehab from bike wrecks riding is so dangerous here. It\’s so dangerous that when it was suggested that plainclothes LEOs be used to get the bad drivers off the roads the police refused to place any officers in such a dangerous position. To put that in perspective that would be like refusing to patrol a park because ther were too many criminals there…

Take a look at:

They did it. We can too.

Imagine a day when we see as many ads for bicycles on TV as cars/trucks, when Lance is just one of many famous personalities touting the comfort/style/utility of the latest commuter ride. When cycling is less an American minority and becomes integrated into the culture resulting in safety and planning efforts on the scale of the insurance companies\’ current lobbies to push technical evolution and intelligent planning guidelines into safety legislation for autos.

Ah, we can dream…

Yikes–promoting bike commuting in Texas! The man isn\’t scared off by a hard job.

Intersting point, reportedly Lance bought the Show winner Naked bike. I wonder if this will be decoration at the new store?

Jonathan;
Do you have any contact info for him? I imagine the Towards Carfree Cities folks would love to have him as a speaker.

Nice going, Lance. But, could ya please LOSE the talk about bike lanes?