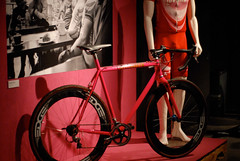 A diverse slice of Portland’s bike culture was on display tonight as ad firm Wieden+Kennedy hosted an opening night party for their Teams of Portland exhibit.

Teams of Portland is a multimedia exhibit that features the bikes, the clothing, and the personalities of some of Portland’s most colorful riding clubs.

The event also marked the unofficial kickoff of the 2008 North American Handmade Bicycle Show (NAHBS), which happens this weekend at the Oregon Convention Center.

The first thing visitors noticed at tonight’s party was a recreation of the iconic Zoobomb Pyle. The colossal tower of mini-bikes, and the Zoobombers who surrounded them put everyone in the right frame of mind. 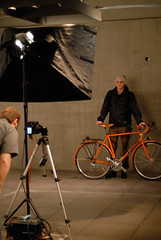 In the photo booth.

The free beer (and red licorice) helped bring out a large crowd. I noticed several bike industry faces from out of town that have arrived for the NAHBS. Among them: Reed Pike from Raleigh; Maurice Tierney, co-founder of Dirt Rag Magazine; clothing designer Sheila Moon; and professional cyclist Barbara Howe (I got her autograph!).

The exhibit was very well conceived and executed (not surprising for one of the world’s most respected ad agencies). Each team had a display that consisted of a bike, a mannequin with the team outfit, and a large photo as the backdrop. Since one of the purposes of the exhibit was to share Portland’s bike culture with visitors in town for the NAHBS, each team had also created their own map of Portland.

These maps, which featured the team’s favorite places to ride, to eat, and to hang out, were available near each display.

Upstairs, there was a professional photographer snapping shots of guests and their bikes (all the photos will be uploaded to the Teams of Portland website) and a band that jammed with a video of classic cycling races projected on the screen behind them.

I’d have to say this was an awesome way to kick off this weekend’s big event! If you missed it, you have until Sunday to see the exhibit. Or, you can view photos, watch videos, and download the team maps at TeamsofPortland.com.

You can view more of my photos from tonight in the slideshow below:

This is one busy bikey weekend. I\’ll have to pace myself to make it through Sunday! Is it a \”problem\” when we have so much cool bike stuff going on it\’s nigh impossible to fit it all in? Others should be so lucky!

it was fun! but so was Independent Fabrication\’s mixer at Chance of Rain (Veloce Bicycles)

Yes! it was super fun meeting some of the IF crew and their bikes…..oh sooooo dreamy

I\’m kind of wondering why they didn\’t include the sprockettes…? seems like a lot of boys.