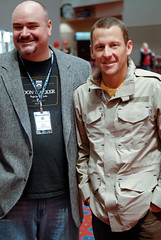 Just as I was leaving the opening day of the North American Handmade Bike Show (NAHBS), none other than Lance Armstrong showed up.

He and few friends ambled in to gaze at the world’s most beautiful bicycles just as most folks had filed out for the night.

Rumor has it that a select group of locals will join Lance for a ride tomorrow morning. The crew that is invited to join him is likely some of same folks that are a part of the Teams of Portland exhibit that opened at Wieden + Kennedy last night.

The connection is that Wieden + Kennedy is the ad agency for none other than Nike, Inc., the Beaverton-based company who Lance has been partnered with for many years.

No word yet on whether or not Lance will compete in the roller races tomorrow night.

Some special guests of a different type will be at the show tomorrow: Portland City Commissioner and mayoral hopeful Sam Adams and U.S. Congressman Earl Blumenauer are both expected to attend.

My friend and I got the wave from Lance today up on Skyline. We were headed in the opposite direction.

My observations on Lance: he\’s smaller than I imagined and his head is really big.