Local author and historian Eric Lundgren — who previously shared his research on Portland’s first “Cycle Park” — will speak on the topic of Portland’s bike history this Friday (11/30) at Portland State University.

Lundgren says his talk will take a spin into our bikey past, to a time over a century ago, when Portland was building a network of dedicated bicycle paths. Here’s more from the event notice:

“For a brief and glorious half-decade, bicycles were a focus for road-planning and road-building. At a time when Portland seeks to gain Platinum-level recognition as a Bicycle Friendly Community, we can look back at a few of the ingredients in Portland’s first golden age of bicycling.”

Lundgren says his talk will feature Oregon’s bike-loving, 19th century governor, T.T. Geer. Along with the photo of him above, Lundgren sent me this cool newspaper clipping about Geer: 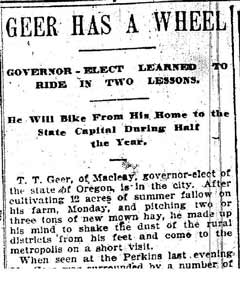 Hopefully, our past can inform our current efforts to create the Second Golden Age. I\’d like to attend, but I\’m cultivating my summer fallow that day.

(After came the 4 wheeled monster..)
very cool newspaper clip.. we could all
learn from this.. I have 🙂

I\’m on this weird thought as I ride,
do cars bring more crime to areas?

Ah, yes… the age when people understood that food does not come prepackaged from a store.

It appears from the snippet of article that Hon. Gov. Geer planned to ride his bike from his home to the Capital… anyone know where Macleay is(sp? not too clear from the snippet), and how far he had to commute? Interesting stuff!

This is a great study and really adds a needed historical perspective to current infrastructure planning.

Tolstoy asked a similar question in Anna Karenin: would Anna\’s affair and downfall been as likely without the new trains in Russia?

Maybe cars do expedite crime to areas where it would not have formerly been. This argument can cut two ways though – it has been used by opponents to light rail expansion to Lake Oswego for the very same reason.

man, being an obsessed dork about early west coast cycling history, it pains me to miss this lecture, as its held during work hours for me… so its good to know itll be archived online! (here: http://www.cts.pdx.edu/seminars.htm if anyone else is curious)

Joe, I don\’t know if cars bring blight by themselves, but freeways sure do. I can\’t think of a better way to bring blight to a neighborhood than to build a freeway through it or near it.

Joel, since the seminar occurs on Friday, sometimes the archive is not set up until Monday (I edit that seminar page)… just fyi in case you look for it over the weekend.
But hopefully it\’ll be ready on friday!