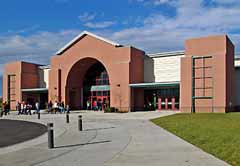 Back in September I shared the news about a potential new indoor velodrome coming to the Oregon State Fairgrounds in Salem.

Now it seems like plans are moving forward and Oregon just might host bicycle track racing at the State Fair as early as this summer. Steve Brown, a track racer and head of Portland Velodrome, says noted velodrome architect Peter Junek has submitted a proposal to Oregon State Parks for the construction of a portable velodrome inside the Pavillion Building on the State Fairgrounds.

A schematic of the proposed velodrome. The proposal calls for using velodrome-specific plywood made in Oregon.

Velodrome architect Peter Junek sent me this photo of a track in Ghent that is similar to the one he’s proposing in Salem.

According to Brown, Junek’s proposal calls for the new track to be completed in time for a Six Day race at the State Fair during the last week of August 2008. Brown says the Oregon Bicycle Racing Association (OBRA) is also proposing a 5-6 date racing series leading up US National Elite Championships and following in preparation for the first World Cup event. 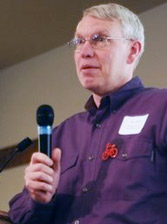 If plans for this velodrome succeed, Oregon would instantly become a destination for national and international caliber racing and it could provide the momentum for similar velodromes to be built in other cities around the state (like Portland!).

Junek’s proposal will be submitted to Tim Woods, the Director of Oregon State Parks next week. Following the submission of the proposal, Woods will meet with Brown and OBRA officials to review the proposal and discuss the next steps.

Wow. That looks like it\’ll make for a seriously steep, narrow track. What\’s the planned banking? Must be 45+ degrees…

It will be a pretty tight track, but anybody who has ridden at Alpenrose will find it easier, smoother, safer, and faster.

I\’ve got dibs on Zak as a six day partner, I just gotta get in shape!

I pledged 50 bucks. Do I get the first ride?

Great for kids to get into bicycle racing. This could Keep them out of trouble or doing something healthy..

So,
Who will be paying for this? Really.

And, if it is coming out of parks money and also portable, will it be moved up here for racing sometimes?

Cause going to Salem sucks.

And the racing population that should be served is primarily up here.

This is great and can only hope it helps tracks in Portland, Bend, Ashland and Coosbay get built.
The racing population for this track will come from all over the state by design, I think that why it\’s at the state fair.
This could be the 4-H of bike racing.

first thing i thought when i scrolled down to the schematic was \”this is gonna be a lot like t\’kuipke!\” (the gent \”bathtub\” – the ~170m velodrome that they hold their 6-day on) – the banking is definitely 45+, steeper than alpenrose, but i cant remember the numbers. the straights are so short they never get a chance to hit \”flat\”.

and dabby, im sure this would cancel out at least some portion of the going-to-salem-suckage you cite. hell, id go to salem to watch racing on a 170m track. hell yeah.

i think putting it at state fairgrounds is a great idea to reach a wide audience that otherwise might never see track racing.

and indoors, theres also the potential for a 6-day with all the trimmings!

oh man. we really would get our own bathtub. SWEET. ive seen video of racing on t\’kuipke, and talked to friends who hit that 6-day every year, and its one action-packed track.

though couldnt we just make it 54 degrees and get faster dernies? 🙂 c\’mon, you know you wanna…

this is super-exciting news, and if it happens, i know what *im* doing next august… its only a couple hours bike ride away!

If you build it, they will come.
Well I\’ll come at least, and I\’ll bring a bunch from San Diego.