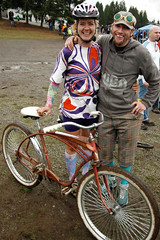 They both competed on this old
cruiser, and they’re still smiling!
Slideshow below
(Photos © Jonathan Maus)

Yesterday, nearly 800 racers converged on the small town of Rainier, Oregon for the third stop in the River City Bicycles Cross Crusade.

With heavy rains soaking the Portland area all week, I had visions of a slog through the mud. Thankfully, the rain held off (for the most part). But the course, while not a total mud bog, presented plenty of other challenges.

Racers not only competed against each other, but those devilish Crusade organizers put together a course only a true ‘cross racer could love: a steep, gut-busting climb; a deep sand section (through a playground); a thick, energy-sucking mud pit; and some classic, Northwest-style slippery backwoods mud.

But if you haven’t raced cyclocross because you think it’s just too tough, meet Dinah Foley. She just happened upon Portland’s Unicycle Bastards gang while they played unicycle bike polo at Alberta Park last week. Next thing she knows, she’s in Rainier, Oregon strapping on her helmet and receiving some last minute racing tips from uni-expert Michael Jones.

“I anticipate being the most amateur in the race,” she said, “but I’ll be having the most fun, so f*** it.” Now that’s the racing spirit!

Also keeping the spirit alive were two intrepid competitors that for some unknown reason (perhaps inspired by Brian Ellin), decided to race an old clunker bike. It could not have been easy, but judging from their post-race smiles, it must have been fun. 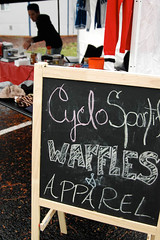 Up in the expo area, Joshua Creem’s Belgian waffles once again proved a popular race-day snack. Creem wants to keep bike lovers well-fed and clothed and he has just launched CycloSportif, which he hopes someday will be a cafe serving Belgian frites and waffles, alongside stylish apres-bike clothing. Judging from the lines at his booth I’d say he’s onto something.

From Rainier, the Crusade moves even further north to the Clatsop County Fairgrounds in Astoria. Next weekend’s event is the much-anticipated Halloween Race. Do you have your costume ready?

See more of the toil, triumph, and spirit from Rainier (including an inappropriate thong-speedo shot) in my photo gallery, or sit back and watch the slideshow below:

*Don’t forget to check all my 2007 Cyclocross Season coverage.

Over on the UnicycleBastards site we have an article with more information on racing Unicycle Cyclocross (aka Unicross):