The Reverend Phil Sano is at it again, and surprise, it involves nakedness and bicycles; only this time, he’s taken it one step further.

After his Pornography of the Bicycle screened at the Clinton Street Theater in front of a shocked (yet appreciative) standing-room-only crowd during last Summer’s Pedalpalooza, he has decided to take his beguiling combination of sex and bikes on road.

He’s got four cities planned for the tour, and, although the first stop fell through (a conspiracy perhaps?), Phil says that Monday’s show in Seattle went “brilliantly”. 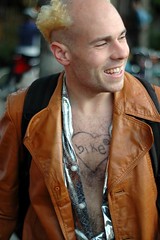 With a few friends in tow, Phil is doing the tour by bike and blogging along the way. I’ll catch the last show in Vancouver (BC) this Friday night, so expect a review coming soon.

I was at the June screening, and I’m curious to see how the Canadians react. Should be fun.

In the meantime, here’s a little blurb about the films…

And if you’re ready for even more, but can’t make one of the screenings, check out the trailer (warning: Not safe for work!).

I hear the the bellingham show was such a success that both shows sold out and they\’re staying to do another show tonight!

But please, in the name of all that is good, don\’t ever film anything featuring a naked Ron Jeremy riding a time trial set-up. You probably can\’t pour enough Clorox in your eyes after seeing something like that.

In response to wsbob:

I think what I have to say we can all agree on. Thank goodness we are not reading about it on HorsePortland.org.