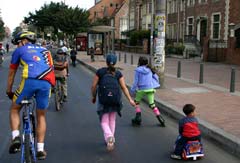 Hoping to emulate the overwhelming success of “ciclovias” in many South American countries, PDOT hopes to bring the concept — which they call “Sunday Parkways” — to Portland by next year.

A ciclovia consists of the temporary or permanent closure of a major street (or streets) to motorized vehicles so that people are free to use the roadway without concern for their safety.

For the past few months, I’ve heard rumors from within PDOT that they were looking into a ciclovia-type event, so I asked PDOT’s Transportation Options Division manager Linda Ginenthal for the lowdown.

Here’s what she said:

Options is looking at possible routes in north and northeast Portland and we’re beginning to have conversations with area neighborhoods and community groups to see how this could work.

We know that this will take lots of volunteers and strong community support to get off the ground. Stay tuned…”

Bogota is credited with creating ciclovias back in the 1970s and the concept has spread like wildfire. The Bogota event has been known to attract 2 million people in one day and similar successes are taking place in Mexico, Barcelona and other countries.

The United States (not surprisingly) is late to the ciclovia party. El Paso, Texas is currently the only city with a regular ciclovia event. The Chicagoland Bicycle Federation is working on their version which they’ve coined “Streets for People“.

One barrier to making this happen might be the logistics and costs involved in coordinating the many volunteers and police personnel that will be required at intersections. And that’s probably just one of many things that will make this a tricky event to pull off (I can also foresee potential political and bureaucratic obstacles).

But no matter the barriers, this is about community, health and access to public spaces. If it can happen anywhere, it can (should) happen here.

Cambridge, MA has a ciclovia event as well. A short stretch of Memorial Drive (aka Rt. 3) along the Charles river is closed to cars on Sundays during the summer. Memorial typically has heavy traffic and no space for bikes on the road. There is a paved path next to the road, great for peds, but too narrow for bikes. On Sundays, Memorial is full of bikes, peds, roller bladers, strollers etc. Wonderfull!

Of course, it\’s only a short stretch, only Sundays, only one road. But still far better than nothing.

Logistically, it does take some effort on the part of the city. There are barriers and cops at all intersections (for auto traffic to cross). But the city manages all the same.

Not sure if it\’s quite the same thing, but Seattle used to close down a full 7 miles of West Lake Washington Blvd to car traffic for most of the 16 years I lived there (not sure if they still do). It was Great for cyclists, runners, walkers, everyone; well… maybe not the cars so much – but having that much lake-front road traffic free for a day a week during the summer was awesome. It would be like closing off Marine Drive here I guess. Can\’t say I\’d complain about that.

Wow, so very cool. A colleague and I are going down to Colombia to document them in mid-Sept.

Since 2000 Switzerland has scheduled regular day-long road closures called SlowUps. It encourages thousands of people to leave their cars at home and enjoy scenic roads under their own power.

I\’m considering a bike holiday next summer that coincides with a SlowUp event in the Swiss countryside.

The following link has more info on SlowUps and Swiss biking in general:

Minneapolis used to do the same thing back in the 70\’s around the lakes (Harriet, Calhoun, isle)every Sunday allowing bikes to have the run of the parkway. They stopped it when local residents complained about having quick access to neighborhood streets

How about the Burnside bridge? 🙂

Paris (of all cities) has really made this happen. Here\’s their list of street closures (source):

Following success for several years on, temporary operations to stop traffic on some streets are continued. These operations are now called \”Paris respire\” (\”Paris breathes\”). The following tracks have been reserved for pedestrians, cyclists and roller-blades on Sundays and public holidays :

Oh yes, and for specific inspiration, check out this article with photos of the \”Paris Plage\” (Paris beach), where for a month every summer they reclaim a busy street on the banks of the Seine river and turn it into a beach, with sand, sunbathing, pools, rock climbing, cafes, and more.

Canada road just west of Hwy 280 near Woodside, CA, has done this for years. Closed Sunday mornings. Or at least they used to do this in the late \’80s and early \’90s.

Westchester County, NY closes off the Bronx River Parkway to cars from Yonkers to White Plains on Sundays.

Naito Parkway would be perfect for this. Bikes and skaters get the street, runners and walkers claim the Promenade and it is safe for all. Close Naito from the South Waterfront area (not sure the feeder street\’s names) to just past the railyard and folks from NW and the Pearl have tremendous access without traffic.

Philadelphia closed down West River Drive every Sunday morning during the summer when I was there for grad school in summer of \’01. It was a great way to get to Manayunk, riding on a car-free road alongside the Schulkyll River. One time I made it the starting portion of a route that took me all the way to Valley Forge and back. I really hope Portland can make something like this happen here.

Its harder to spell than it is to pronounce: Schuylkill. For those not familiar with Dutch influenced names, its technically pronounced \”Skoo-Kill,\” but most folks I know prefer a quick \”Skookul\”

Within the next couple of years, you should be able to ride the river trail on a dedicated path from Philly to Reading!

That would be so dope…

San Francisco has Sunday closures of part of the roads in Golden Gate park, which turns that section of the park into a huge party, with lots of people riding / walking / skating aimlessly around. I\’d like to see us go farther than temporary closures, and make a few prime biking streets more permanently bike-only. Berkeley does a good job of this, by placing concrete \’salt and pepper shakers\’ about this size of trash cans in a X shape every other block on some streets. Bikes sail right between them, and folks who live on those streets can still drive to a from their homes, but there\’s no motorized through traffic.

Really great that Portland is trying to do this! Every city should be competing to do bigger versions of this then the next. In the cities I have seen it in, it is really a testament and indicator of the conviviality of a city.

*claps hands enthusiastically* This is gleeful! I very much hope to see it come to fruition soon. ^_^

\”Ciclovia\” is the portuguese and spanish word for a segregated cycle path, a road for bicycles. It has this meaning both in Portugal and in Brasil, as well as in spanish speaking countries like Spain and Colombia. It\’s funny, looks like it\’s now used to designate a carfree day in a normal car road, also.

London\’s getting in — they\’re shutting down the whole city for a day!!

London is buzzing today with the news that, for one remarkable day, many of the capital\’s roads will be completely traffic-free and open only to cyclists.

Londoners – from Brixtoners on BMXs to Crouch Enders on choppers – will be coming from far and wide to ride down the city’s most famous roads, taking in sights like London Eye, Big Ben, and Buckingham Palace. It’s open to everyone and completely free to sign up.

Marin County is considering scheduling road closures to cars on the Headlands: http://www.kcbs.com/pages/800221.php?contentType=4&contentId=790547

Mount Tabor is one on Wednesdays. Love it!