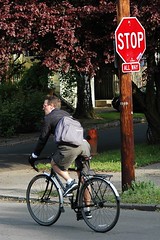 A bill that would have allowed
bicyclists to yield at stop signs
passed the Oregon House in 2003.
(File photo)

Continuing the discussion of whether or not Oregon should seek an Idaho-style, roll-and-go stop sign law for bicycles, I recently looked back at our previous flirtation with the idea.

Back in the 2003 legislative session, Senator (he was in the House back then) Floyd Prozanksi (D-Eugene) sponsored House Bill 2768. Here is the summary of that bill:

The bill passed the House but never made it out of a Senate Rules Committee.

The BTA supported the bill. Heres a blurb from their website:

Karen Frost (photo) is the Executive Director of the Westside Transportation Alliance and was the BTA’s Program Director in 2003. She testified in support of the bill but said the BTA was not spearheading its passage. Frost said they were merely providing support to Sen. Prozanski:

“We decided it would be a good bill to support and we offered testimony at hearings on its behalf…but it wasn’t our main priority. We had other irons in the fire.”

Scott Bricker also testified in support of the bill on behalf of the BTA (I’ll have more from Bricker later).

Minutes from a March 2003 hearing for the bill in the House Transportation Committee show that legislators had safety concerns about the idea. One representative was concerned about kids in particular.

“the relationship between bicycles and motorists and how this bill could complicate this relationship further.”

During a Senate hearing in May of 2003, opposition to the bill came from ODOT’s Bicycle and Pedestrian Safety Coordinator Rick Waring. He thought the bill would:

Also adding a voice in opposition to the bill was McMinnville Police Chief Wayne McFarland. He said the bill was not practical for motorists because,

While it’s clear the idea of bicyclists treating stop-signs-as-yields was not universally accepted (or understood), it did have support from some legislators and from the advocacy community. Would they support it again in 2009? Can fears and questions about the law change be adequately addressed? We’ll have to wait and see.

As for the bike community, while their is some opposition, it seems the majority would be in favor of a law change.

I would not be surprised to see a bill like this surface again. When it does, it will be interesting to see how the conversation goes.

Hmm, most of their terms expire 6/30/09, I wonder if they want to go out as heros? It would be fine legacy to help get this law past.

I\’m aware of that Coyote. Perhaps I should have noted that in the article. And actually Ronkin has retired too – Read all about it here.

If this change in the law would put enforcement action where it belongs, at busy stoplights, I would support it. I am still seething over my $242 ticket for rolling safely through SE 23rd and Salmon on 5/10/06. The average frequency of cars through that intersection at 8AM is about once every ten minutes, according to my study. But I never see enforcement downtown, where inexperienced bicyclists blow stoplights in heavy traffic. Makes you question the motivation of the police.

Is there anything we can do to help this bill get passed? Do you have email addresses for anyone that we contact in regards to this bill?

The more I ride my bicycle, the more I agree with this quote:

And the intent of the bicyclist should be to not stop unless doing so is required to safely traverse the intersection.

…with the flow from top to bottom.

This would make the roads a lot more sane and safe, because automobiles would always be able to predict the behavior of bicyclists (they will keep moving) and bicycles could then conserve energy by staying in motion for a greater portion of their journey (within reason of course).

It seems that an Idaho bike advocacy group ought to have some thoughts on the success, or lack of it, with their roll-and-go law. The web site for Idaho\’s Gem State Bicycle Alliance is gone. Does anyone know who to contact in Idaho?

I think potential support for this type of bill (which I favor) may hinge on the perception of cyclists as responsible road users. Every time a cyclist blows through a stop sign or red light at full speed, they convince people we can\’t be trusted.

We\’ve got a couple of years to each do our part to demonstrate we\’re just as serious about sharing the road as we are about holding drivers respnsible for their sometimes lethal carelessness.

Hey thanks Jonathan for the background research. It seems like many motorists already treat stop signs like yield signs for bikes.

I\’d say over half the time I arrive at a stop sign at the same time or even after motorists reach their stop sign, they wave me through. I don\’t know if it is because they like cyclists, or if they are just so used to cyclists going through stop signs.

By the way, that link of the article about Stuart, who led the effort to pass the original stop as yield in Idaho 25 yrs ago did not work.

Here is a link to Idaho transportation http://itd.idaho.gov/bike_ped/
I already interviewed the bike coordinator, it was posted here about a week ago.

I don\’t go out of my way to make it so, but I hope all stop sign runners come to the bloody fate they deserve. The rules of the road are there for a reason, and those that arbitrarily decide the rules don\’t apply to themselves are selfish, immature morons.

Quite ghoulish of you, Anonymous. Despite counting myself among the \”stop signs are stop signs until the law dictates otherwise, so effing well follow \’em\” camp and thus being in the minority myself, I\’m quite pleased to be completely unaware of the fates you wish upon motorists breaking the speed-limit, jay-walking pedestrians, and those recording the big game without the expressed written consent of the appropriate sports league.

\”I hope all stop sign runners come to the bloody fate they deserve.\”

You\’re a poor excuse for a human being, Anonymous.

Idaho laws should be adopted nation wide, and we will see more bikers. It would also shut up all the haters who point out that bikes don\’t follow all the laws.

Never in my life did I expect Idaho law to be more progressive than Oregon law, or anywhere else, for that matter. Though I\’ve lived in several states, I\’ve only commuted by bike in Idaho. I have corrected many people on the finer points of Idaho traffic law, and now I think I know why.

Adopting slow-and-go would make cyclists\’ intent more predictable to motorists as to whether the cyclist will be making a full stop.

I\’m not arguing with that point, John. I\’m saying that the law presently *doesn\’t* allow for this sort of maneuver, and I\’m not about to pull the slow-and-go until it\’s legal for me to do so, because I don\’t want to get a ticket and I don\’t want to be made some Terry Parker-esque motorist\’s example of why we\’re all a bunch of law-breaking hooligans who need to be licensed. Anyone who wishes to believe that exercises slow-and-go without the law being in place constitutes some heavy-handed form of civil disobedience is welcome to pretend so, but unless you plan on taking part in the push to move such legislation through as well, you might as well go play house. That whole \”I\’m not going to work with the system \’cause it\’s broken, man!\” line is a bunch of bull used by lazy people who want others to do the real work for them.

Idaho laws should be adopted nation wide, and we will see more bikers. It would also shut up all the haters who point out that bikes don\’t follow all the laws.

Despite the fact that violations from different camps don\’t cancel each other out, I\’ve really enjoyed the recent \”motorist\’s unofficial 10MPH speed limit buffer free-pass\” response to the \”hooligan scofflaw\” tirades that I\’ve seen flying around this blog of late. Let\’s make it a point not to forget that when we push for slow-and-go legislation and certain cranks in this town try to say we don\’t deserve it. 😉

Anonymous, do you ever drive over the speed limit? If yes, then what is it about speed LIMIT that you don\’t understand? \”The rules of the road are there for a reason, and those that arbitrarily decide the rules don\’t apply to themselves are selfish, immature morons\”.