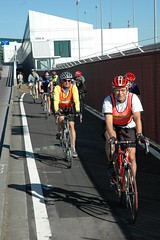 With ample and secure bike parking, a dedicated bike path directly to the terminal, and with a staff that responds to bicycle concerns, Portland International Airport is known as the most bike-friendly airport in the U.S..

Now, they’re making it even easier to fly-by-bike with the addition of a brand new multi-use path (aerial photo below).

According to Port of Portland project manager (and 2007 Alice Award Nominee) Jason Gately, the new path will connect the airport’s Frontage Rd (which leads into the terminal) and the Mt. Hood Overpass with the Marine Dr multi-use path. 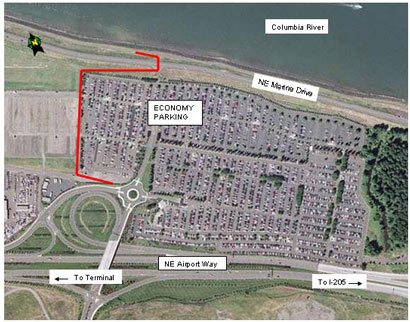 Here’s how Gately describes the new path, “It comes down from the dike and passes along the west edge of the economy parking lot. This will cut out a few miles of out of direction travel for people wanting to get on to the Marine Dr trail from PDX (and vice versa).”
(Photo courtesty Jason Gately)

Gately says they are just waiting for a permit from the Bureau of Environmental Services before they begin construction. The project is expected to begin in late September and should be nearly complete by November 2007.

This is a great bicycle connection that opens up new possibilities for folks who ride to the airport. I’ve done so several times and I highly recommend it! If you’re curious what it’s like, I reported about my experience here.

And don’t worry, you’re assured better treatment than this guy.

Sounds great! I have never biked to the airport. Do they have a secure area to lock your bike?

Further, what I meant to ask was \”how secure is secure\”? What do they have set up there?

One thing worth noting, is that this is not just good for the Airport.

This also improves access between the Marine Dr. path and areas south and southeast of the Airport, including the two MAX stations…

So even if not used for the Airport exclusively, it is nice to have another connector to the Marine Dr. path…

great point! And it also provides access to the new IKEA which opens in a few weeks.

secure means big covered racks, with minimal meth-head bike theft activity.
i rode to PDX when i flew to cancun. it was almost as fast as driving and i didnt have to pay for gas or parking, and my girlfriend didnt have to pick me up in the middle of the night:).

Glad to see that this is happening here and not something like this: http://greencycles.blogspot.com/

Hard to believe that things like this still go on…

Hmmmm. Wonder how much cheap, assemble-it-yourself furniture I can fit on my Burley flatbed trailer? 😉

Forget the furniture – just bike to IKEA for the Swedish Meatballs and Lingonberry juice in their cafeteria.

I have been craving them since the sign went up!

Wonder if IKEA also thought to put in secured bike parking, or did they think that people would only drive there because of the gobs of stuff they\’ll buy?

How are those racks any less secure than any other racks?

I would say, at least they are in prominent and highly visible locations…

Forward thinking Port employees like like Jason Gately, Chris Corich, and Steve Schreiber are why PDX is not only the most bike-friendly US airport, but one of the \”greenest\” airports in the country. Three Cheers to them!

The new path will be a nice asset for Port employees and people with Port business when the Port\’s HQ moves to PDX in the next couple of years.

\”great point! And it also provides access to the new IKEA which opens in a few weeks.\”

One more reason to crave that bakfiets, eh Jonathan? 😉

alx, thanks for posting that link – that\’s sure a scary account of airport security gone berzerk, and the cyclists\’ account sounds very credible.

As for the new bike racks at the PDX IKEA – they look to be a \’wave\’ style rack…I thought that these were not allowed/ permitted in the parking code for Portland. (Am I incorrect?)

Too bad their bike parking is not as good as the Ikea bike parking we all (BTA staff, Sam Adam\’s staff, Bikestation staff, Portland Transport, etc.) saw on our bike tour of the Netherlands.

That was the dream we had for the PDX IKEA – so what happened??? Was it the PDC?

(Jonathan, I or Chris can send you a photo. Their IKEA had covered parking.)

This trail link is even better with a Brompton…just ride up to the terminal…fold bike…roll up to xray machine…feed it into scanner…roll onto jetway…check as a gate check (like a stoller) on Horizon…fly away…and then the bike awaits you on the tarmac to bike away at your destination.

The Santa Barbara CA airport (nice beach path to town) or Long Beach Airport are both good places to fly and bike to.

VR…I suppose if you\’re in and out of a place within a couple hours tops, the usual staple or wave is great. Thinking about spending a half a day or more inside while your spendy roadie is parked and locked out in the open, is a bit less concerning in secured quarters.

VR – they\’re not any more or less secure than *any* bike rack. All bike racks are \”unsecured bike parking\”. ME asked if they had secure bike parking, which I would consider to be either attended, with a check-in, check-out system; or a bike locker, where the bike is physically protected by a shell, like the PDOT bike lockers downtown.

\”Standard\” was referring to the style of rack they were using, not its level of security. Sorry for the confusion.

And what would make the wave style against Portland code?

(Just curious, not meant to derail the discussion)

I could care less about IKEA. They do not even sell bikes there, so I have no reason to go by bike, car, or train.

The airport thing is great though. Me and my Bike Friday are both smiling.

Next, we need a bike path to Beaverton from downtown PDX, and 300 miles of single track in Forest Park (ok 10 miles) – Tankagnolo Bob

Wave racks are not against Portland code. They have a PDOT handbook for suggestions and a performance standard:

\”a. The bicycle frame and one wheel can be locked to the rack with a high
security, U-shaped shackle lock if both wheels are left on the bicycle;

b. A bicycle six feet long can be securely held with its frame supported so
that the bicycle cannot be pushed or fall in a manner that will damage the
wheels or components; and

c. The rack must be securely anchored.\”

City bike parking standards for new development are listed in 33.266.220. They are worth looking at.

I e-mailed someone at BDS to ask where they have their long-term bike parking. The code appears to require about 12 long-term spaces, in addition to all the short term ones.

My understanding is that wave racks are disdained because the usable space per footprint is less than regular staple racks (how many bikes do you see parked under the upside-down \”u\” of the wave?).
If you want to wonk out on Portland bike parking, go here: http://www.portlandonline.com/transportation/index.cfm?&a=58409&c=34813

I rode out to the airport for the first time yesterday to meet my parents. I saw the parking at the end of the bike path, and it didn\’t look secure at all. The airport employees have a gated parking area with locked access, but the public parking is not gated. There was one bike parked there with its front wheel missing, presumably stolen. The parking area is covered, and it looks like there\’s room for at least twenty bikes, but I wouldn\’t leave my bike there while I flew and expect it to be whole upon my return. It\’s true that it\’s right near some office windows, but they seem to have shades drawn, and I wouldn\’t really expect anyone to say anything if they saw someone messing with the bikes anyway. We need something better that this if they\’re gonna call the airport bike friendly.

\”The airport employees have a gated parking area with locked access, but the public parking is not gated\”

Initially the entire structure was gated with only access being for employees. After I wrote about the need to have public access, the airport split the area into two…giving us non-secured, un-gated access. I think this is better than nothing.

\”We need something better that this if they’re gonna call the airport bike friendly.\”

The airport is responsive to bike-related needs. Jason Gately (sort of a bike liaison for the Port of Portland) reads this site and I\’m sure he\’d be option to coming up with better solutions. Let\’s work with him to increase the security of the public bike parking. Any ideas on how we could do this? More lights perhaps? Or maybe a sign that says \”This area monitored by Airport Security\”.

I have said this bike parking is secure, but I admit it could be better.

What are the chances of boarding a bike, and not a folding one, on a plane to your destination? That would be very forward thinking. I would love to make trips to visit fam and friends in CA and just hop in my bike from whatever location in the baggage area they might trailer them to w/ my carry-on.