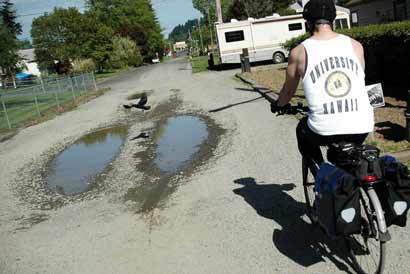 Gravel roads — like this one in outer SE Portland — are barriers to a successful bikeway network.
(File photo)

Next week at the East Portland Community Center (740 SE 106th) they will host the first of three open houses that will bring the public face-to-face with a golden opportunity to improve cycling that only comes around once a decade.

Since the first open house takes place in outer southeast Portland I asked city bike coordinator Roger Geller for his thoughts on the bikeway network in that part of the city.

He said that while outer east Portland may have many miles of official bikeways, that doesn’t tell the whole story, 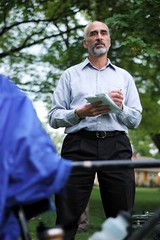 “What’s interesting about outer east is that if you look at pure miles of bikeways, it’s got more than any other. But when you compare that with the low amount of ridership (relative to other parts of the city), there’s clearly a disconnect.”

Geller realizes that not all bikeway miles are created equally and that a traffic-calmed bike boulevard is a far cry from a bike lane painted on a six-lane thoroughfare where cars speed by at 45 mph,

“We’ve got to take a look at our design guidelines and what type of facilities we are offering people. I believe a big reason a lot of people ride or don’t ride has to do with the quality of their experience.”

Here are some of the questions Geller hopes to discuss at the open house on Tuesday,

He also touched on barriers for outer east Portland…

“One reason many of the bikeway miles in outer east are on major arterial roads is because they’re the only road that go through. We don’t have the luxury of a grid network out there. Back in ’96 (when PDOT last updated the Master Plan) our criteria for bikeways was that they be direct as possible, serve popular locations, and that they don’t jog all around the map.”

“The good news is that it’s flat, and with I-205 light rail coming, we have an opportunity to work with TriMet for great bike-and-ride facilities… turning transit stops into destinations, like many European cities have done. Is there a way to orient our network in east Portland so that it focuses on getting to these new light rail stations (like at Gateway and Lents)?”

If you ride a bike in outer southeast, or if you just want to help create safer and healthier transportation options for your community, you don’t want to miss this open house. Here are the details:

For more information on the Bicycle Master Plan, visit the city’s webpage and/or browse my archives for previous coverage.

Also, if you can’t make the open house, Geller encourages you to leave comments on this site with your feedback, experiences and input about riding in southeast Portland.

I’m in (I think). Unless I missed something, the time of the meeting is not listed. I’ve been waiting awhile to talk to someone with some influence about improvements that can be made for us east county folks. Maybe part of the reason there’s so few of us cycling is because it can get kinda scary out here. To my mind (and apparently a lot of drivers as well) a white stripe and a bike emblem does not necessarily make a “bike lane.”

The Open House begins at 5:00pm, with a facilitated discussion beginning at 6:00.
See you there!

Gravel roads huh? I lived over by Lents Park back in the day (101st/knight). They supposedly were supposed to pave that area when they did the sewer work in 87ish.

Well, that was 20 years ago and those roads are still gravel.

Ride to the Master Plan Open House!
The monthly Bike Master Plan Ride will start an hour early in June: meet at Terry Schrunk Plaza at 4:15, roll out at 4:30. We’ll tour the bikeways between downtown and East Portland Community Center, and arrive in time to look at the displays before the discussion begins.
For more details, see this webpage:
http://www.portlandonline.com/transportation/index.cfm?c=34816&a=147283

I have to disagree with first photo caption. As long as your tires are up to the task, gravel roads with wicked deep potholes are the ultimate in traffic calming. I switched to 700 x 35C tires a few years a go just to take advantage of roads and alleys like this.

I have to agree with Coyote – my daughter and I routinely bike down these alleys because there are rarely any cars to contend with, and when there are, they go about five mph.

I hope I can make it to the meeting, but I think the best way to make cycling safer out here is to have more cyclists. Putting cyclists in the schools is a great opportunity, too. The Metal Cowboy – Joe K. – came to talk to some of the students at my high school (for the Bikes in Schools Program – do I have that right?), and there are a few bike commuters there, like me. I know for a fact that several of my students have changed their driving habits because of this sort of interaction – and that saves lives. So paint all of the marked bike lanes you want, but they won’t help unless the general attitude out here changes. Joe and others help greatly on that front. Thanks!

If you look at that double puddle as 2 bike wheels, and the wet marks on the pavement above it
as a
bicyclist..it almost looks like a rider on a bike

this is a secret bike lane!

I commute to outter southeast daily (As a weird coincidence, the community center is right next to the office). I often take the potholed back roads home and enjoy every moment of it. In the past 3 years that I have been commuting those routes I have encountered a whopping two cars. As an added bonus, some of the potholes can be quite fun to go through, around, and over.

I forgot to add that unfortunately I will be out of town the day of the meeting. I hope to attend one of the other dates though.

Maybe ripping up the asphalt and leaving potholed gravel roads like this are the answer for safe and fun bicycle routes. The Tillamook bicycle boulevard from Montevilla in NE into downtown is very slow and dangerous with so many stops and crossing through streets. I have close calls almost every day but there just isn’t too many other direct route options from there. I’d much rather commute on these gravel alleys.

I think the gravel roads are fun too!

I cannot make the meeting, but would like to register my thoughts. There are two things that keep me from biking more than I do:

First, I don’t feel save on busy roads. When I come east over the Hawthorne bridge, those few blocks until Ladd addition are the most uncomfortable of the whole ride out to 66th where I live. Finding quiet roads is my overwhelming favorite, and I’m personally quite happy with gravel.

Second, there are few safe places to leave my bike when I get to my destination. Sometimes I daydream of a series of fenced, illuminated, video-watched bike storage spots sprinkled on a -say- 10 block grid. A person would be able to ride to within 5 blocks of their destination and feel some comfort that if their bike was stolen, it would at least be on video tape!

There are other minor issues, but those two are definitely barriers to my riding. As it is, I ride for pleasure when I can pick my route to be pleasant and never have to leave my bike anywhere. I’d like to be able to use my bike for chores, but then I have to ride to where the chore takes me (not necessarily pleasant/safe) and lock my bike where I can (and hope…)