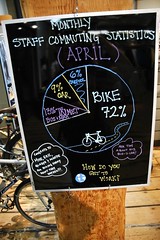 It all started last May, when they began a store-wide commuter challenge for National Bike Month and as part of an effort by store managers to reduce their ecological footprint.

The response was so positive that manager Tim Reinhardt decided to make it a year-round program. He also worked to get other Patagonia stores involved.

I stopped by their shop yesterday to see how things have been going and I was stunned at how much the program has taken off. Right inside the entrance is a big Bike to Work display and an indoor bike rack overflowing with employee bikes.

The display features free maps and resources, a TV showing the BTA’s Decide to Ride PSAs (developed back in 2000), and a sign from a letter-writing and petition campaign for the Bike Commuter Act. 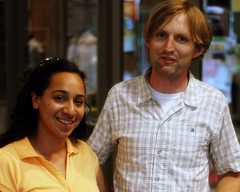 As I snapped some photos, I met employee Gladys Ruiz. She said that in April, 72% of the store’s employees rode their bikes to work (13% took transit). That’s a great accomplishment, but Ruiz figured they could do even better.

She showed me a chart with the results of Patagonia’s company-wide Bike Commute Challenge. As you can see from the image below, during the week of May 12-18 the Portland store took an amazing 100% of their commute trips by bike!

Patagonia’s Denver and Seattle stores didn’t do too bad either. They finished the week with 89% and 84% bike commuting respectively. 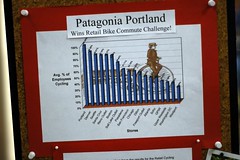 Ruiz said they worked hard to make it happen by having raffles throughout the week. Prizes included; a one-hour, paid break to get out and ride the store’s Fat Tire Cruiser bike, and free massages, gear, and bike tune-ups.

Also during that week, the store promoted the Bike Commuter Act by encouraging customers to learn about the bill, sign a petition and write letters to their representatives in Congress. Ruiz said they had a “huge response”. 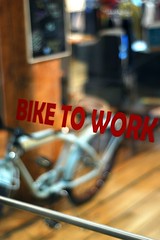 The entrance to the store.
File photo

Assistant manager Tim Reinhardt exemplifies the level of dedication the store has to bike commuting. He lives in Vancouver and his five year-old daughter goes to kindergarten in Portland’s central eastside. He usually carpools on the one day a week when he’s responsible for taking her to school.

This month he was determined to cut out that car trip so his daughter hopped on their trail-a-bike and rode to school. The trip was made easier by support from Tim’s co-workers. A few of them met up with the father-daughter duo at a coffee shop in North Portland and rode into the city together.

Kudos to Patagonia for going the extra mile and for reminding us that every day is bike to work day.

Just for the record, this makes me want to buy more Patagonia stuff. And I hope not to open a can of worms, but this is the opposite reaction I had to Chad at Portland Cycle…whatever.

I, also, will want to buy Patagonia when clothes shopping–this is an example that more businesses should emulate.

Incredible products, unbeatable customer service, amazing return policy, and great forward-thinking like this are all reasons why I shop Patagonia.

Thanks for the story, we were all very flattered. I’d like to correct that Tim is the Assistant Manager of our store. Mike Vanreken is the Manager of Patagonia Portland. And what a great manager he is – It is extremely rare for Mike to miss a day without his bike.

tim,
thanks. I’ve made the corrections.

keep up the great work and keep us posted.

The bike to work week that lasts all year. That is real commitment. Nice work!

This is a great example of why I buy Patagonia merchandise. I started buying their clothes when I got into mountaineering in 2002 – they make great products, and they care about their corporate impact on the world, in all respect. Thanks, Jonathan for doing a story on this – I hope they get a lot more people looking at their products as a result.

They don’t make and bike specific items. They tend to make outerwear that can cross boundaries, and be used for many different activities. This way you wouldn’t need a jacket for each ski, bike, trail run, and so on. Check out their Spraymaster, Houdini and Nine Trails Jackets. These all make great bike jackets.

They do make messenger bags. I would like to know where there stuff is sewed, and under what conditions, incl. wages.

If you find out let us know. Don’t bother asking Chad at Portland Cycleweat though…as AO seems to know too, he’ll just tell you to f**k off.

… I want to buy more of their stuff too. That is awesome. Yay!

Thanks so much for the write up Jonathan! To address a couple of questions brought up in comments, we make our garments in factories all over the world including the US. We are a member of the Fair Labor Association and you can get more info on that organization here:
http://www.fairlabor.org
And thanks for Matt M for plugging a few garments for us. The jackets he listed are all staff favorites, and we do make that messenger bag- the Critical Mass, in two sizes. We are very well known for our Capilene (synthetic) and Merino Wool base layer products which are very appropriate for biking. Everyone’s favorite right now is the Wool 2 T-shirt. Our Capilene products are all made with at least 50% recycled materials and are all 100% recyclable!