Behind the scenes at SmartTrips Command Center 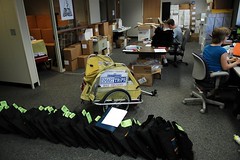 Yesterday, after a brief struggle with motorized transport units in downtown Portland, I was able to gain access to PDOT’s secret Command Center for their SmartTrips Southeast Bike Delivery Operation Squad (SSBDOS).

Before being carted away by security guards, I was able to snap a few photos.

As you can see by these images, the bike delivery team of the Transportation Options Division is an elite squadron, capable of blanketing the entire Southeast quadrant of the city via bicycle, while loaded with propaganda to encourage biking, walking, and transit.

Three agents were present and they worked among stacks of files and boxes stacked nearly to the ceiling. 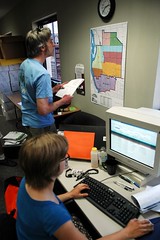 One of their key operatives is Agent Timo. In this photo (with Agent Elly in the foreground) he is mapping out his delivery route. Shortly after this photo was taken, he lathered up with sun blocking solution, loaded bags of maps, prizes, and other paraphernalia into a cargo trailer, and mounted his non-motorized, two-wheeled transport vehicle.

He has not been seen or heard from since, but he is a veteran squad member, and is expected to have completed his mission.

I also observed strange markings on the walls. They seem to be encouraging comments from recipients of the Transportation Options propaganda. I have turned the photos over to intelligence officials to determine their origin.

During this transmission, more intelligence about this effort has come to light and their main information hub has also been uncovered.

Why cut out Brooklyn?

“Why cut out Brooklyn?”

Because it is in New York 😉