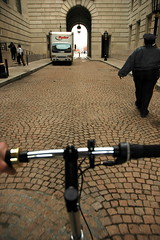 My day started 17 hours ago. I got up at sunrise to finish some stories and be early to our rally that began at 8:00am up on Capitol Hill.

Now my shoes and socks are damp and my legs are heavy from pedaling a three-mile loop between the site of my wi-fi connection and Capitol Hill (three times, about 13 miles total riding, some of it in the rain).

It was a very memorable day.

I made the map below to give you some context for the rest of the story.

The loop I won’t soon forget. Check it out on g-map pedometer.

I got an early start because I was excited to see Congressman Jim Oberstar at this morning’s rally.

Here are a few shots from the event.

After Oberstar’s rousing speech, I stuck around for Blumenauer and his Bike Commuter Act press conference.

Once that wrapped up I chatted a bit, snapped a few photos, and introduced myself to Trek Bicycles President John Burke.

At his presentation last night, I noticed he used a few of my photos without my permission or knowledge, so I thought that’d be a good conversation starter. He said someone from the marketing department must have found them. No big deal really, I was just surprised to see them.

We talked a little about the bike industry, he gave me his card, we shook hands, and that was that.

A few minutes later I was back on the tikit. I needed wi-fi so I made my way for my first of three rides from Capitol Hill back to the Reagan Trade Building (marked “Wi-Fi” on the map).

I ran into a few familiar faces along the way.

The Reagan Trade Building is where the Summit has been taking place…but more importantly it’s the site of my reliable and fast wi-fi connection (that I’m paying $16 a day for!).

The ride was a blast. The tikit may not look like an urban assault vehicle, but it is. I weave in and out of traffic, ride up curbs and on sidewalks through mazes of tourists, all while smiling, ringing my bell, and taking in the sights and sounds of DC.

Once I arrived I wrote a few stories, uploaded photos and then hopped on the bike for a 1:00 meeting back on Capitol Hill.

After that, we had another meeting at 2:00 and after sitting in and snapping photos, I boarded the trusty tikit and jetted back to the Reagan Trade Building once again to write more stories, and upload more photos.

Our next meeting was with Senator Ron Wyden at 4:30 in the Senate office building. So back on the bike I went (notice a trend forming here?), I roared down Pennsylvania Ave. in my lowest gear, bell blazing the whole way.

I got there in no time flat and then got some bad news. It was my first attempt on the x-ray machines on the Senate side, and they weren’t as nice as the security guys on the House side. They denied me and my tikit entry!

They said flat-out, “no bikes in this building.” I pleaded with them and said everyone else was cool with it, but they said, “we don’t care what they do on the House side, we have different rules over here.”

So I tried a different entrance and I was denied again.

I had just sprinted uphill to get there and now I couldn’t get in. I still had some stories and photos to work on, so I decided to hop back on board the tikit and make the 1.5 mile sprint to my wi-fi connection for the third (and final) time of the day.

I got a bit of work done, and then (yes, again) pedaled my way back (in the rain!) up to the Senate offices for the big party and reception.

The party was great. Held in a regal room, with glittering chandeliers, some nice finger foods, and free beer. Here’s how it looked:

After the party I rode here (Barnes & Noble).

So that was my day. Crazy huh?

Tomorrow is the final day, and I have much more to share. But now I must sleep (and change my socks). Stay tuned.

And don’t forget to check all my other stories and photos.

Man, Jon. One of the best summers of my youth was highlighted by a two-week stay in DC. I bopped about on a borrowed Italian racer and took in all the sights (and FREE museums). Security wasn’t so high in 1984 and I was pretty much the only bike making the rounds.

Anyway, your pics sure have taken me back.

Great reporting. Have a terrific trip back. I’m sure your family is dying to have you back in River City.

Great work, Jonathan! Your coverage has been world class, I am just eating this stuff up. And what a stroke of genius on the part of Bike Friday on loaning you the Tikit. Clearly it has helped you with your coverage, and throughout this expanded coverage that the Tikit enables, it gets well-marketed itself! Everybody in town is now drooling for such an easy to use bike….

Scott West of Travel Oregon is in the photo (not Todd West – Todd Davidson is our CEO). Great coverage of bike tourism!!

Thanks for catching that Jennifer. I’ve made the correction.

Funny to hear your magnotrometer woes on the Senate-side of the Hill. Sounds about right! As someone who works on Capitol Hill, it pains me to see how out of your way you went for Wi-Fi. There was a much closer location just a few blocks from the Capitol, near Union Station. Ebeneezer’s coffee shop, along 2nd St. NE. They also have LOTS of seating (unlike most Starbucks, where you could die waiting for a comfy seat…) Next time!