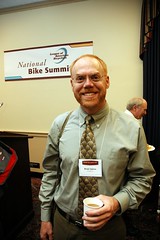 Here at the Summit we do a fair amount of introductions. Every meeting, every new person we meet.

Usually we say our names and what organizations we represent. It all quickly becomes a blur, until the refreshing introduction of first-time attendee Brad Upton,


Besides meeting BTA Director Evan Manvel in Corvallis years ago, Brad came on this trip without knowing anyone in the Oregon contingent. He was a bit worried about that but he has become fast friends with all of us.

Brad, in center, with smile.

Meeting with his representatives in Congress was the highlight of the trip for Brad, 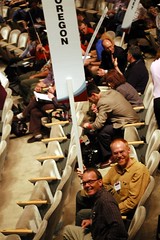 Brad holds the Oregon sign
at the state delegation rally.

“During the breakfast rally on Capitol Hill, somehow I ended up right at front. There was Jim Oberstar…and Blumenauer. It was amazing, and I’m totally energized by what happened in our meetings yesterday. Next year I plan on doing more preparation and speaking up even more.”

Brad is too humble, I saw him in action on Capitol Hill yesterday, speaking his mind to Congressional staffers.

In our meeting with Representative Darlene Hooley’s staff he was able to talk with them about specific trails and programs in her district. 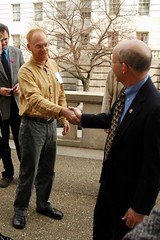 Brad’s energy and smarts has been an invaluable part of our efforts here in DC. Members of Congress and their staff have a special appreciation for citizen advocates that are passionate enough about their issue to make the trip to Capitol Hill (especially from the other side of the country).

Will he be back next year?

“For sure, I’ll definitely be back..and I plan on getting even more involved with the BTA and my local groups in the meantime.”

Thanks for joining us Brad, It’s been great having you on the team.

Wow. That is so cool.

That kind of activism and committment makes what I do seem pretty small and insignificant.

Sometimes there is a big difference between being an agent for change versus being a complainer/issue raiser/soap box ranter.

And Brad’s smile: kind of weird but reminds me of the bumber sticker “More Wag Less Bark”

“Sometimes there is a big difference between being an agent for change versus being a complainer/issue raiser/soap box ranter.”

Not just sometimes. Brad sets the standard for all of us: The bottom line is being constructive.

That is my bro! I will second, and echo the fact that Brad has been a life long cyclist. He is the main contributing factor that got me into riding as well, and now I am an addict! He is also very committed to broadening the level of awareness of cycling as a viable mode of transportation. I have had the luxury of living in Europe for the last seven years and I have to say that people like Brad are America’s number one hope that cycling will ever become as popular, and recognized as an alternative to cars in the states as it is here. Good job Brad!

I too was a first time National Bike Summit attendee! Wow! What an experience! I have been busy locally with my state legislature (writing letters) and with my employer (more or less lobbying the administration for simple things – bike racks, showers, and participation in Bike To Work). The Summit was such an exciting experience and I too, will go next year more prepared and ready to speak up! It was a great summit and I’m ready to do my work here and go back next year to learn more!

Before the Summit, I had only thought locally, but I’m thinking globally now. What’s the saying? Think global, act local?

I had meant to do a summit report blog on myspace, but just haven’t had the time. I understand that I was quoted somewhere that I would do that. I guess I need to do that soon.

Thanks for all of your reports on the summit. It’s great to get others’ perspectives.