This task force is made up of representatives from various Federal agencies and leaders in health, transportation, and education and reports directly to the U.S. Department of Transportation.

This select group is responsible for preparing a report to Congress that describes a national strategy and establishes best practices for advancing Safe Routes to School.

Safe Routes to School is a national program that works with kids, parents, teachers and communities to promote walking and biking to school through education, enforcement, engineering and education.

In the recent Federal Transportation Bill, $612 million was allocated for the program through 2009. 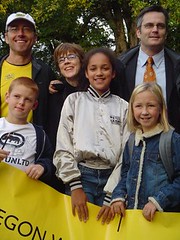 In addition to this national task force, Ping sits on the steering committee for the National Safe Routes to School Partnership, a group of 227 organizations that work to support the development and implementation of the program.

In his work at the BTA, he overseas a staff of five (and growing) and works with 19 locals schools to implement the Safe Routes curriculum. According to Ping, “Portland has the most comprehensive Safe Routes program in the country.”

For more on Portland’s Safe Routes to School program, see the City of Portland’s website, WalknBike.org (a state-wide website maintained by Ping), and all the coverage and photos on IShareTheRoad.com.

Ping is no stranger to transportation advocacy and encouraging kids to ride. He has been involved with bikes both as recreation and vocation for over 20 years.

Before moving to Portland from California in 2004, he was a Director of the Transportation and Land Use Coalition and an Associate Director with Trips for Kids in Marin, California. In 2000, he founded a community bicycle program called Pedal Power.

Robert is passionate about his work, and for good reason. His 4 year-old son Christopher just started at Faubion Elementary in Northeast Portland and his one-month old son Oliver will be pedaling to school before we know it!

Congratulations Robert, and thanks for all the work you do.