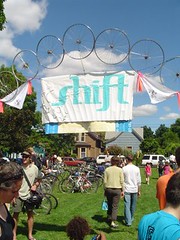 Shift to Bikes—a grassroots group that sets the standard for promoting bike fun—celebrates their fourth anniversary this weekend with four special events you won’t want to miss.

The fun starts with a special Birthday Breakfast on the Bridges tomorrow morning and it ends with a Shift picnic in Laurelhurst Park on Sunday. Check out their home page for all the details.

Since their start in 2002, Shift has remained an all-volunteer force that has had a huge impact on the local bike scene. They’re the folks behind such Portland institutions as Breakfast on the Bridges, the Multnomah County Bike Fair, bike moves, Pedalpalooza, the Get Lit program and much more.


I will always have a special place in my heart for Shift. They are largely responsible for my involvement in the bike community and their smart, creative and kind brand of bike activism is what has inspired my work from the beginning. 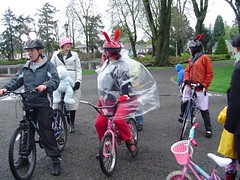 [The ’05 Bunny on a Bike Ride,
one of my fondest Shift memories.]

I’ll never forget my experience on the Bunny on a Bike ride back in March of 2005. We met at Peninsula Park and ride leader Carye Bye had hidden plastic eggs in the rose garden. Inside the eggs were hand-printed bike haikus (that are still displayed in my office!). It was a rainy day, but my daughter Eleni and I (and about a dozen other riders) had a fantastic time. I remember being amazed that someone would take the time to host such a ride for no other reason than to build community and have fun on bikes.

For me (and many others) Shift was a gateway drug that lead me down the road to more fun and friends that I could have ever imagined. 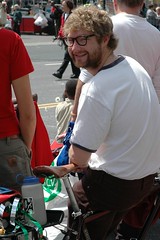 Take Carl Larson for example. Carl was just passing through town when he happened upon Breakfast on the Bridges. He was so impressed with the energy and sense of community that he started showing up to more Shift events. A few months later, empowered by Shift’s email list and do-it-yourself vibe, he led a Pedalpalooza ride and fifty people showed up.

Now Carl is a regular Breakfast on the Bridges volunteer and a major part of an exciting new group that is advocating for more car-free streets.

Matt Picio is another cyclist who is grateful for Shift. He posted this message to their email list a few days ago:

“I’m about 60 lbs overweight, and most of the groups I’ve been involved with over the last 6 years here in Portland have subtly (sometimes not so subtly) shunned me due to my weight or fitness level. Shift has been the most welcoming bunch of people in Portland that I have met – All of you do a tremendous job representing yourselves, Shift, the community, and cyclists in general. Thanks for you friendliness, your hard work, your activism, and for being out there on the bike, just riding.

My experience this year getting back into cycling has been a great one thanks in large part to all of you, and those of you I haven’t met I hope to on a ride or other event in the future.”

Many of us owe a great deal to the vision and energy of a small group of bike lovers who got together after BikeSummer in 2002 and decided to create Shift to Bikes. I won’t list all their names, but you probably know many of them already. They’re the ones who always wear the best costumes, have the most creatively decorated bikes, and have the biggest smiles on their faces.

I hate to think what life would be like without them.

[The Folz family (Allan, Carie and Cody) have been involved with Shift from the beginning.]

I could go on and on about what Shift means to me and what it means to Portland, but I’d rather hear from you. What is your favorite Shift memory and what does Shift mean to you?

My all-time-favorite event is easily the first MCBF. It was a royal bike Rumpus. We were flying below the radar then and much more laise-faire with regards to, shall we say, conduct of participation.

I think the best summary, the one that captures the energy of the event, was that some OG ZooBombers and a group of messengers set out to do battle and settle a score that sunny Saturday in June, the culmination of which was Nekkid Tall Bike Jousting.

As for second place on my favorite Shift event, it is about a 100 way tie. Debbie’s Bomb certainly deserves mention. But probably the events I most remember are the ones where random new people showed up, then decided to stick around, and turned out to be great new friends. Kind of like Jonathan did at his first Bunny on Bike parade.

Love you all Shift!

Favorite shiftiness has to be, hands-down, every single Breakfast on the Bridges I ever dragged myself out of bed to attend.

But my favorite single shift event — and my first — was the July (I think) 2004 Midnight Mystery Ride. A cyclist was kidnapped by a pro-car faction (“four wheels good; two wheels bad!”) a ransom note was left behind, and the rest of us were led on a wild scavenger ride throughout northeast Portland…

it was the august mmr.(fri the 13th, i believe)
i agree, that was the best mmr i ever went too,
and also my first.

true to its origons there are a wide array of people who take part in the bike fun and I wouldnt want it any other way.

with the broad communication network available you never know who will show up at a happening.

Some of the most dedicated volunteers I have ever known have come out of Shift, I always seem to find assistance when needed.

I think my favorie events are those epic bar crawls that turn into naked rides.