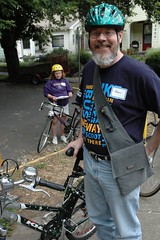 On a recent Sweet Summer Cycle Ride (photos) I met an interesting guy named Brent Zenobia. He was passing out a flyer about a research project he is undertaking as part of his Ph.D. candidacy in the Engineering and Technology management department at PSU.

What intrigued me about him was the nature of his research. He wants to use high-tech computer simulation models to analyze the how and why behind Portland’s success in encouraging alternative transportation choices.

According to Brent, he will use a computer simulation program developed by Los Alamos National Laboratory that is used to study virus outbreaks:

“It’s sort of like Sim City (a popular computer game) in that it can be used for cultural modeling. I’m interested in how the idea to use bicycles and other modes spreads through a community.”

“I’m studying the process through which people decide to rely less on cars. Ultimately I’d like to learn why Portland has developed a community culture which is so supportive of green transportation. Why is Portland’s transit culture different than that of, say, Memphis?”

Brent needs about 8-10 cyclists who until now have only ridden when the weather is good, but would like to try bike commuting this winter.

Heh. I lived in Memphis for many years. No one bikes to work (or uses public transportation) unless that is the only affordable option. Why? I guess because no one has tried. I tried bike commuting when I moved to Portland because other people had already been doing it. Someone has to be the first one to do it. Others will see that it is an option when there is a role model.

I have bike commuted for 8 years now, and were I to move to any other city, I would bike there, too.

I must say that showers at work would be a bigger concern in Dixie. If you have never been to the South in the summer, you have no idea what long, humid, hot, summer they have. Air conditioning is not viewed as optional, and most cars have it.

I am a fair weather commuter, lived in P Town for 25 years. I think it is the result of the Urban growth boundrary that helps this movement. It is a Euro style city becouse of the growth boundary. I have always bike commuted, in Monterey Caly as a kid, in Spokane and Seattle as a young adult, in here in P Town. I would commute in any town, and did here in P Town before it got easier. Love this place though, the variation in bike cultures is toooo fun, as is the growth of bike lanes etc.

Funny, the sunniest place, ideal for cycling is San Jo(f-n)se, Caly. The only thing within walking distance from your home there is your car, best weather, NO cycle commuting going on, while here in the rain belt, we get the best rating for cycle friendly

The weather here is mild most of the year. You do need rain gear for a few months.

If alternative transportation exists and is convenient and affordable people will use it.

Don’t get too excited about Portland being real big on alternative transportation: it isn’t. There may be more people doing it here than some places, but the VAST majority are driving motorized vehicles and an insanely large chunk of those are driving gas hogs and supporting terrorist sponsoring nations with their gas purchases.

Cycling groups such as Shift to Bikes, Zoobomb, C.H.U.N.K., etc. have been a big part. As people see that biking is for the “cool kids” who do funky crazy stuff and have so much fun, they want to ride a bike, too. I’ve known more than one person who went to a Shift event, then fixed up their formerly-collecting-dust bike and started using it daily.

Several readers have expressed interest in participating in my study, and I’ll be getting in touch with you shortly (I have to finish grading a midterm exam by this evening.) Thank you!

Back in June, Timo Forsberg had a nice quote in the Oregonian: “That one decision you make in the morning, when you are leaving, is the point of change.” Definitely, there’s some truth to that. At the same time, though, it’s important to understand how people’s prior history and life experiences shape their choices.

In looking at how people decide to shift to bikes, three psychological processes are important.

1. Framing is the process of deciding which issues are relevant. Some of these issues are purely functional: “Is it going to rain today? Do I need to transport something heavy? How far am I going to have to ride?” Other issues are cultural or aesthetic in nature: “Do I care about how other people are going to treat me when I walk in with a bike helmet and safety vest? How does this decision fit in with my own value system? How supportive are other people likely to be about my decision to ride? Am I making a political statement by riding a bike?”

Only a few of these thoughts occur to us consciously. Most are there sort of in the background, and manifest themselves as feelings rather than clearly articulated questions.

Framing powerfully influences the outcome of the decision process. Framing is “plastic” in the sense that we only consider a limited number of factors when deciding whether to ride.

2. Adoption is the process of acquiring new experience and evaluating the fit between a technology — in this case bikes — and a set of needs.

Sometimes the need comes first: “I’m tired of spending so much money filling my tank. What are my options for saving money?” Other times the technology comes first: “I’m really enjoying riding my new bike. I hadn’t really thought about it before, but maybe I could ride it to work…”

Adoption is the process of working out what the best options are for meeting your needs. It’s kind of like one of those puzzles where you roll the ball around in a maze trying to get it into the hole — there are often conflicting needs, and a big part of the adoption process is figuring out what combination of technologies can help. “I’d like to get rid of my car and I ride all the time. Unfortunately, from time to time I need to go to Costco, and I’m concerned that I wouldn’t have an option for hauling a lot of stuff. Until I can figure out how to solve the groceries problem, I don’t feel comfortable getting rid of my car.” Then one day you hear about Flexcar, and it occurs to you that maybe car sharing could be a good solution that’s compatible with biking…

3. Selection is the process of choosing one of your previously evaluated choices. This is the process that Timo was referring to in his quote — that decision you make in the morning, “Am I going to ride today?” Selection is a habit. Once we get into a groove (or perhaps a rut) we are loathe to change unless we have to, because change involves thinking, and thinking is hard work; people will avoid thinking if they can. (There are evolutionary reasons why this is the case.)

So, to summarize, Timo is right that the crucial decision is the one you make in the morning; we all want to develop constructive habits rather than continue dysfunctional ones. To do that, it is useful to understand the psychology of habits — how to break them, and how to change them.

It’s tricky to compare cultures. When I ask, “What makes Portland different than, say, Memphis?” it begs the question: is Portland really different? How can we say for sure?

We could look for physical traces. We could say, “Now we have such-and-so additional miles of bike lanes, as compared to 10 years ago.” Or, we could count the number of people on bikes. These are the physical artifacts of culture; but we need to be careful that we don’t read too much into these when it comes to understanding culture. They could be interpreted in a lot of different ways. More people biking could mean the culture is friendlier to bikes; alternatively, more bikes could mean that a backlash is coming from car drivers (for example, last year’s exchange of letters in Willamette Week over the “Biker, Interrupted” article.)

Dig a little deeper beneath the surface, and you can look at what people tell themselves. Consider these examples.

“Stay the hell out of my right to ride where I want; keep your bliss to yourself and let that be your reward. I view my bike as a way to use the streets to get around safely and efficiently in our city, and I don’t accept your advice to push me off on to side streets when I can travel more safely and speedily on a through street.” (Willamette Week, August 24 2005)

“Goddamn bicyclists shouldn’t be on the road.” (Willamette Week, November 30 2005)

What do these three quotes tell us about bicycle culture in Portland? We can’t say for sure, except that there are some very different assumptions in play here. To understand what those assumptions might be, we would need to dig deeper still.

At the deepest level of culture are consensus conclusions that people make about the nature of the environment and their place in it. “What is my relationship to nature? How do I decide what is true or real? What are other people like? How important to me are my relationships with other people? How do I think about space or time?” (These assumptions tend to be tacitly felt rather than consciously articulated.)

So, someone who believes that the “goddam bicyclists shouldn’t be on the road” might assume that humans should dominate nature, that he or she is superior to most other people, that other people are to blame for their own misfortunes, that other people are always looking for a handout, etc. These attitudes are about more than just bicycling. They indicate a more general perspective on life and what it means to be successful (or unsuccessful) in the world.

So, if we want to look at whether Portland really has a different culture than Memphis, we would want to identify what some of these assumptions are, and how widely they are held. You could get run off the road in either place, but there may be important and subtle clues as to why you were run off the road, and therefore how likely you were to be run off the road.

i don’t even know how to drive a car. i had a permit once when i was 15 (i am now 22), but never really convinced myself of why it was a cool thing to drive a car. i bike because it’s way faster than a car, and it helps my anxiety (acquired from city living and stress by cars in my sphere). a habit? not really. i live in seattle for another year for school, and i still bike there. it’s lonely, but a major source of dignity. portland has it easy as far as living, breathing, and moving around…it would be ridiculous not to go with the flow…

Bren just linked me to this discussion, and I look forward to reading his thesis, which he has completed. We need more discussions of this type on the culture which promotes bicycling.

I hate typing on my iPad; the spelling gets screwed up. I meant to say that Brent linked me to this discussion.