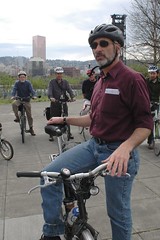 You’re not officially a bike geek until you’ve spent an evening with the 13 super-volunteers that make up the Portland Bicycle Advisory Committee (BAC).

Basically, they’re a smart bunch and they watch our backs in City Hall.

The meetings can be pretty wonky and boring sometimes (that’s why they’ve got free coffee), but they can also be full of high drama, verbal fisticuffs, and other interesting twists and turns. For instance…

I remember when an ODOT spokesperson delivered the bad news about the St. Johns Bridge and I remember when someone slipped me a note about a new development permit they had heard about.

Next week the BAC is hosting a bike ride led by City of Portland bike coordinator Roger Geller. The ride “will tour some of the challenges and opportunities a cyclist finds in inner SW and SE Portland.”

Here’s more from the ride flyer:

“We will see the good the bad and the ugly as we cruise up SW 5th Avenue, take a long look at the connections into the Downtown from Southwest, and then double back to head toward the Willamette River. We will ride through Waterfront Park, Riverplace, and on to the burgeoning South Waterfront District. From there we’ll continue south along the Greenway Trail to the Sellwood Bridge. We’ll figure out some way across the Sellwood Bridge and continue back north along the acclaimed Springwater Corridor Trail.”

Ride participants will be given scaled maps of problem areas and are encouraged to make recommended improvements and send them to the BAC. If you’d like to join us for this 11 mile ride, meet at the 5th Ave. entrance to City Hall at 5:45 on Tuesday, August 8th.

If you have questions or need more information, please call Roger Geller at 823-7671.

Thank you so much for posting this. Although I’m a fan of hollywood, I still prefer a great art house flick.