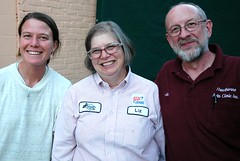 I love that headline.

Imagine…an auto clinic that believes so strongly in the health and safety of our streets that they put a mural full of pedestrians and cyclists on the wall of their parking lot.

At the dedication party last night there was live music, free food, a strong community vibe, and off course a fantastic and inspiring new mural. 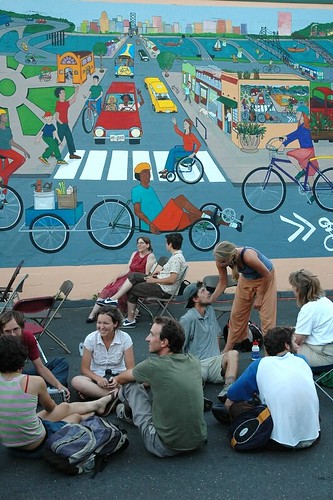 Hawthorne Auto Clinic co-owner Jim Houser originally considered a mural design showing vintage sports cars racing around a track (he has a thing for old Fiats), but instead he chose a share the road theme.

I asked him how he came to that decision and he said he thought about the future of Portland and what he could do to make it a better place.

Jim—with partner Liz Dally—has owned the shop since 1983. Back then, according to Liz, Hawthorne Blvd. was a much different place,

“It used to be a sleepy little street. I used to commute to work on it but now I’m scared to death to ride anywhere near it.”

Liz, a Reed College alum originally from Pittsburgh and Jim, who grew up on a farm in western Ohio, joked that the mural will hopefully serve as a sort of “subliminal message” to their customers and passersby that we all need to slow down and share the road.

Thanks goes to Jim, Liz, Sara, and the entire mural team for such a gorgeous and meaningful addition to our city.

What an awesome opening, great food, and a beautiful mural. I wish I lived closer so I could A) see it more, and B) Could have painted on this project. Well done. Applause all around.

I love the diverse modes of pedal power in the mural. And it is so inspiring that this is on an *auto* repair shop.