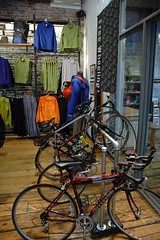 The Ecotrust building in Northwest Portland is one of my favorite places to work; it’s quiet, connected, and caffeinated.

It’s also home to eco-friendly global retailer Patagonia. I passed by their storefront the other day and noticed an in-store bike rack and curiously bikey signage. I had to investigate.

I met employee Tim Reinhardt and he told me that as of June, they’ve started their own bike commuter challenge. According to Tim, at a recent managers meeting, each store was asked to come up with three initiatives to “reduce the store’s ecological footprint.” 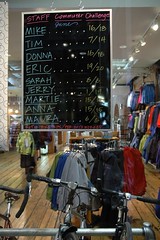 Since Portland is bike mecca, it seemed fitting to start a bike commute challenge.

To promote cycling among their employees, they’ve put a bike rack in the store and they’ve got a running tally of how many days each employee has biked to work. Tim said 52% of the store’s employees ride to work on a regular basis and he himself puts in the long haul, riding from Vancouver to downtown 3-4 days a week.

Apparently the response has been so good (even among newbies) that Tim said they’re thinking of expanding it to other locations (Seattle is already in on the fun).

They’ve also carried the bike theme into their window displays with cool bikes (donated by Veloshop) and mannequins dressed with messenger bags.

Rock on Patagonia…thanks for taking the initiative!

this is absolutely wonderful! great!

Looks like Larry needs to get on the ball…

Thanks for riding your bike to work from Vancouver to Portland. (One more bike on the bridge! And thus more room for freight traffic too.)

If there is anything our office can do to make your bike commute better let us know – even if we have to pass it onto our regional partners at http://www.ColumbiaRiverCrossing.org

We are currently asking for comments on making Vancouver more bike friendly and seeking input on making both bridges bike friendly too at our on-line bike survey. (Oregon bicyclists who bike up here can fill it out too.)

Enter for a chance to win a LAB Chrome messenger bag too.

Just a quick update: We stopped by the store this weekend, and got confirmation that due to overwhelming pressure from the blogosphere Jerry has significantly stepped up his bike commuting. He should be joining the top ranks when next month’s numbers come out.