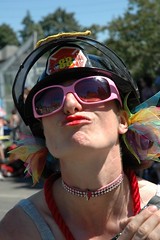 I can’t think of a more fitting end to Pedalpalooza than thousands of people coming together at Saturday’s Multnomah County Bike Fair at Colonel Summers Park. At the peak of the day, fair organizers counted 1250 bicycles scattered throughout the park!

Despite a sweltering sun the competitions rocked and all the booths were packed with smiling faces. Nearly all of Portland’s bikey groups were represented; from the Belligerantes (an all-Schwinn bicycle gang) to the Zoobombers. 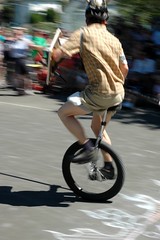 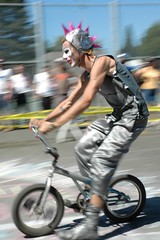 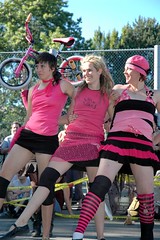 Hundreds of people got fitted for free helmets, waited in line for free bike tune-ups, made their own pedal-powered smoothies and bike buckets, got hitched at the “Marry your Bike” booth, and marveled at the performances and competitions.

A special congratulations to Stephanie who vowed eternal love for her bike in front of her family, a priest and singing onlookers. Here she is, making it official and riding off into bikey matrimony.

The Sprockettes celebrated their 2nd Birthday with an inspiring performance that got a standing ovation from the crowd.

The Alberta Street Clowns unveiled a new routine that included a heart-wrenching story set in Gascanistan, the “Ramp of Death”, fire and explosions! Dat captured the aftermath.

The crowd was also treated to the first ever bouts of unicycle jousting! Michael, Topher, and Izarra demonstrated amazing skill and wowed the crowd.

I ran into Amy Walker, editor of Momentum Magazine from Vancouver BC. She puts together a great magazine and came down to see what Pedalpalooza was all about.

Amy wasn’t the only one from BC at the Fair. Frances Mahon said she and a group of friends arrived on Friday and came for Pedalpalooza:

Other characters in the crowd:

A big thanks to Ayleen Crotty and her esteemed corp of volunteers for an unforgettable day.

Stephanie is a brave woman. i don’t think i could ever commit to just one bike.

just a heads up…
deadbuny lives here (and does not joust).
the dead babies are from seattle, and do in fact joust

Thanks for the clarification half pint. So what’s that guys name?

My apologies to deadbuny for the mistake.

Another edit: Sprockettes are at least 3 years old. I cannot remember if they were at the first MCBF or not. But they were definately at the second.

As blogs like this are about all we have for historical record keeping, you should confirm with someone from the original troop when they first performed.

Extra credit trivia how many (and who) of the original Sprockettes are still performing today? I am certain of two, but am likely missing a couple.

I talked with one of them at the Fair and had in my notes that she said 2nd anniversary.

I strive for accuracy and hope to confirm this factoid asap.

Sprockettes anniversary show – it was the 3rd MCBF they’ve performed at, which makes it their 2nd anniversary. (Midnight Mystery Ride had a similar cardinal/ordinal issue a while back.)

It’s been an awesome two years and we’re just getting started! Yeee-haw! Who knows what next year’s bike fair will bring?

I believe the Sprockettes debuted at MCBF 2004, so this is both their second anniversary and the third year they’ve performed.

Great coverage! I was so worn out by the end of the day and im still a bit sore :)!

the deadbaby in question is KO

he promises to be back in Portland jousting July 15th

Thanks for the online recap, Jonathan!

There were 12 main coordinators, 6 additional key assistants, 4 MCs, 7 judges, 2 sound operators, and about 55 volunteers. Together, these folks put on a pretty rockin bike party.

HOWEVER! Next year I want to see more competitors! Don’t be shy and spend the year practicing. I mean, come ON, derby, how hard is that?!?

The super awesome awards and chalk art were created by Chops, with assistance from him rad mom who helped with fill-in on the arena art.

Many more thanks/praise that could fill this space, but I’ll internetly leave it at that for now.

ayleen, we are nearly ripped to shreds from so much fun & bike love. thanks for all your hard workin!

More pictures from the Derby and trackstand. The best one is probably the moment Dingo realized that Flamin’ Hot Cheetos are, indeed, hot.

Of the original 43 Sprockettes, 53 remain and twelve were now stationed at Guantanamo bay Cuba.
GO Sprockettes rock on at Gitmo!
The Cheeto’s were indeed hot, I got me a handful of habaneros to train for next year.

Here is a short video of the unicycle jousting.