A consulting firm hired by the City of Portland Office of Transportation just completed an economic analysis of Portland’s bicycle industry. The final numbers say that our bicycle-related industry is worth $63 million to Portland’s regional economy (which has a total value of $17 billion) and that bicycles account for 800 jobs.

The survey was given to more than 100 businesses, varying in size from a one-man shop to companies with 50-100 employees. They were asked four questions related to:

According to the survey, when asked whether Portland’s reputation for bike friendliness was good for their business, 82% said “absolutely” or “yes”. 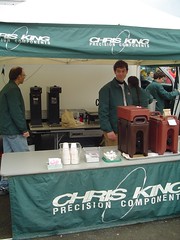 This survey breaks down the economic impact into four main industry segments. Here are the findings from each of them:

Tours, Rides, Races, and Events
On an annual basis, an estimated 40,000 people participate in more than 2,100 rides and events of various lengths and sizes, an average of more than six per day. These events bring in more than $7 million annually to Portland’s local economy.

Manufacturing
Portland has a growing $11.6 million in manufacturing and distribution activity, including a number of small-scale, independent, high-end bicycle and part manufacturers, such as Sacha White (Vanilla Bicycles) and Ira Ryan (Ira Ryan Cycles) as well as larger companies like Kinesis, Mountain Cycle, and Chris King Precision Components. Companies such as United Pipe Bending and Fabrication and Huntco Supply, which each have a portion of their businesses producing bicycle racks, report growth over the past decade.

Retail and Repair
Close to 40 Portland specialty bike, bike clothing/gear, and rental shops report close to $34 million in gross revenue. Most shops have experienced growth in the past decade, and many shops are less than five years old. In addition, consumers buy an
estimated $3.8 million worth of bicycles and accessories at larger discount, department, and toy stores.

Mia Birk, principal of consulting firm Alta Planning, says the $63 million figure is “by no means a conclusive number”, and that, “there is a clear need to delve deeper into the economic impact of bicycles in Portland.”

Another interesting stat from the report is their finding that Portland has nearly 2,100 bike rides and events each year that bring in about 40,000 people.

For more on Portland’s bicycle industry, check out my industry links and peruse the 35 articles in my Industry category.