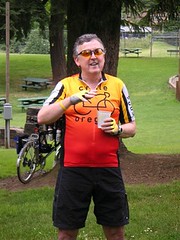 Last year Metro and Cycle Oregon teamed up to host a bike ride from the Eastbank Esplanade to Champoeg State Park. They informally called it the “Policymakers Ride”. It was an invite-only affair to showcase a future Portland-to-Champoeg leg of Oregon State Parks’ Willamette Valley Scenic Bikeway Route.

On the ride were all sorts of bike and transportation bigwigs including former Mayor Bud Clark and reps from Metro, Oregon Parks and Recreation, BTA, PDOT, and others.

The ride was so popular they’re doing another one this summer. As with last year, this is an invitiation-only ride, hosted and supported by Cycle Oregon.

If you’re not on the invite list, here are the super-secret details:

On Friday, July 7th, Zari Santner, Director of Portland Parks and David Judd, Director of Vancouver-Clark Parks, will lead a corps of civic visionaries on a two-state, two-bridge bicycle ride. Our company will include many of the region’s leading adventurers well-versed in parks, trails and greenspacery.

The purpose of this second annual Cycle Oregon-sponsored Visionaries Voyage is to husband a vision for a Portland-Vancouver regional trail network serving both bicyclists and pedestrians as part of a comprehensive, interconnected system.

Highlights of the leisurely-paced journey will include a visit to the Smith and Bybee Wetlands, a hosted lunch at downtown Vancouver’s splendid Esther Short Park, and a cruise along the newly-christened Burnt Bridge Creek Trail before returning to Oregon along the I-205 bike path.

Sounds interesting. I’ve been wanting to learn more about Vancouver and points north and it’s always fun to rub shoulders with the transportation planning and advocacy crowd.

I’ll be sure to bring back photos and a report from the ride.