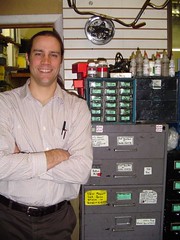 Ending speculation as to whether or not he’d stick around, Tom Knipe has just announced he will leave the Community Cycling Center by July 7th.

Knipe is the former program manager who became interim Director when Daniel Bohn left the position at the end of last year.

He had been working closely with newly appointed Executive Director Susan Remmers for the past month and a half.

Knipe’s three and a half years at the CCC had made him one of the most senior members of the staff.

Knipe, who said the decision to leave was mutual, made a statement to friends late Thursday:

“After three and a half incredible years, I am moving on from the Community Cycling Center. I’m tremendously proud of our growth and accomplishments during my time as a senior staff member; I’m also confident and excited about the future of CCC. We have an amazing team of talented and dedicated staff & volunteers, model programs, and an experienced Executive Director who I have been pleased to work with and who I am confident will lead CCC to the next level.”

Knipe is a bright guy and will have a positive impact wherever he ends up. Good luck Tom and keep in touch!

Thanks Jonathan! I’ll keep you posted on what comes next.

Hey Tom! Sorry to see you go… Keep in touch. Best wishes to you and your family.