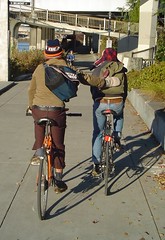 [Biking is better
with buddies.]

Carye Bye (of Bunny on a Bike and Red Bat Press fame) didn’t become a full-fledged bike commuter until she got some one-on-one mentoring from a friend. This individual encouragement was just the nudge she needed to become a full-time cyclist.

Now, she not only rides to work, but runs errands and visits friends on her bike. She thinks more people would ride if they got a similar nudge so she’s taken the initiative to start a “Bike Buddy” program in Portland:


“A one on one mentor can be a crucial step for many folks to feel the confidence to change their lifestyle. As the number one bike city of our size in the US, I was shocked to realize we don’t have a bike buddy program in place.”

After an initial email to the Shift list back in December, Carye and others have been working behind the scenes to figure out how to put everything together. I’m now happy to report that there are currently two groups in Portland that are starting up Bike Buddy programs.

Southeast Uplift (SEUL, a non-profit coalition of 20 neighborhoods) and the Lloyd District Transportation Management Association (LDTMA) are both in the early stages of organizing pilot programs.

Carye’s vision is to form a volunteer group to help support these fledgling programs and to someday create a city-wide program as well as offer how-to resources for smaller companies and schools to get their own Bike Buddy programs going.

If you want to stay in touch and help out with Portland’s Bike Buddy programs, get on this handy email list Carye has set up.

I think this is a great idea! I’ll look into volunteering for this program. 🙂

Awesome, awesome idea. I sold my car exactly 1 year ago to this day (June 1st), went to City Bikes and got a great bike, some pamplets and some good advice from the great people there. I thought I was entering a very intimidating and overwhelming world, instead I was entering the best new phase of my life. The last year has been better than I could have ever imagined. I’m healthier, happier, saving lots of money by avoiding things like auto insurance and those gas prices (I just laugh when I see gas price signs now, poor motorists). The cycling community here is great and this program sounds awesome.