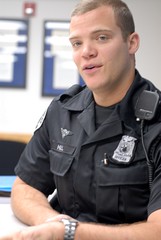 Officer Darke Hull of the Portland Police Bureau Traffic Division is one of six Portland officers to have been recently certified as a Pedestrian and Bicycle Crash Investigation expert. The certification came after a rigourous, 5-day course offered by the Institute of Police Technology and Management (IPTM).

I met with Officer Hull to learn more about the class and his role within the PPB.

Officer Hull has been on the force for 7 years, with three of those in the Traffic Division. He is a motorcycle officer on one of two Fatal Crash Investigation teams. He and his team investigate around 50 fatal incidents a year and he also works Critical Mass and other events.

Officer Hull is a soft-spoken guy who is deeply committed to his job. He seemed like more of a student than a police officer as he presented stacks of documents and papers from the course and told me he keeps them by his nightstand so he can study them every night. In Hull’s words he has “a willingness to do whatever it takes” to do his job. 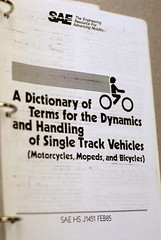 The class, partially funded by PDOT, was not some willy-nilly seminar, where everyone goes home with a nice notebook they never read. This was a very intensive certification course with a final exam, that “not everyone passed” according to Hull.

The class started off with a pre-test in physics. Officer Hull showed me page after page of calculus notes with complex equations that help them determine things like speed of the car and bicycle relative to the distance they were found from each other at the scene.

The page titled, “equations for examining airborne, spinning projectiles,” made my stomach turn.

One portion of the class even touched on how road rage can effect crash analysis.

The final part of the class was a full-blown, reconstructed crash scene. Lifelike dummies were used and many types of crashes were simulated. Each crash was analyzed by teams and their findings were critiqued by other officers and by officials from the IPTM, then presented to the entire class.

I was amazed at the attention to detail that goes into a bicycle crash investigation.

“I’m driven by our goal…which is to find out why the crash happened. I always hope it’s a problem with the roadway, because we can fix that. But unfortunately most of the time it’s driver/rider error.”

Even though most of will never be involved in a serious injury or fatal crash, it’s good to know Officer Hull and his partners have such in-depth, bicycle-specific training. The more they know about bikes, the more fair and accurate their crash investigation findings will be.

Great Interview Jonathan! How many officers on the force have taken this course?

6 officers from our Traffic Division got certified and 15 others region-wide (Wash. Co. and Beaverton too).

Jonathan, does this mean that the Portland PD intends to investigate more bicycle crashes? It’s my understanding that crashes are not investigated unless there has been an injury. Is this true, and is it likely to chance with the addition of this specialized training?

Time to add a new show to the CSI franchise — CSI:Portland.

I bike commute 5 days per week all year round to downtown.
I hope the crash investigation team will start citing drivers for failing to yield right-of-way to bicylists in bike lanes. Drivers commit this infraction nonstop and it is the single most common and life-threatening traffic violation for us. Even professional drivers like taxis and delivery trucks don’t observe this law.
I hope the police will also talk to drivers about blocking the bike lane when they are waiting (for various reasons) to turn right.
In February, a driver turned right, immediately in front of me, as I entered an intersection. I made contact with the tail end of his car, avoiding smashing into its rear side panel by slamming on my brakes and the exercise of sheer mental will. I hit the ground, fortunately only getting minor scrapes and sore muscles the next day. My bike needed the front wheel trued.
The police officer did not cite the driver, all the while admitting (to me) it was a traffic violation. The officer told me he wouldn’t have cited me if I had been driving and done the same thing. This is unacceptable!
Now I see that the police will cite a bicyclist for not stopping at a stop sign. Apparently, if it’s an inconvenience to the driver then it’s an infraction, but if a driver does something that can injure or kill a bicyclist, oh that’s ok.
Most of the time we bicyclists are either playing extreme defense or are just plain lucky, some of the time the drivers are paying attention and some of the time they are NOT “driving while driving.” They’re on the phone or off in la la land thinking about who knows what, certainly not about OTHERS who might be using the road, including pedestrians.
The Portland police I’ve been in touch with are well-mannered and decent acting. Who knows what they really think, however, especially when they don’t even inform the driver when he or she committs an infraction like this, or issue a written warning.
I wish I wore rose-tinted glasses because then I could merrily go along with the Portland leaders’ fantasy that we are a platinum biking city, or just shy of being one. Ha! That’s a bunch of greenwash.
I’d like to see our tax dollars going to REAL substantive changes rather than to phony, money-sucking marketing campaigns.
I don’t want to die on the street and I don’t want anyone else to either.

I am going to purchase a loud air horn for my bike to warn motorists and keep them from moving into the bike lane in front of me without looking. I figure if I can’t be visible enough in broad daylight, at least I can be audible. I’ve also noticed that only about one in a hundred people actually look before opening a car door into a bike lane, and that might be a generous estimate.

You asked, “does this mean that the Portland PD intends to investigate more bicycle crashes?”

Yes, I have heard from several people (including the former commander) that they do plan on investigating more crashes…and not just those that involve a serious and/or fatal injury.

I remember officer Hull as one of the motorcycle cops assigned to Critical Mass giving out tickets to cyclists on the February 2005 and at other times.