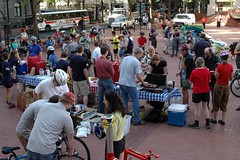 This morning Pioneer Courthouse Square was more than just Portland’s living room, it was our kitchen! In honor of Bike to Work Day, City of Portland Transportation Options crew cooked up and served breakfast to bunches of bike commuters. I expected the same old boring bagels and bananas, but Options staffer Jeff Smith manned the camp stove and made fresh eggs for everyone!

The event attracted a diverse crowd. There were ladies in dresses, hip young urbanites, and even our bent brethren. I even noticed reputed messenger Dabby McCrashalot chatting with BTA Director Evan Manvel. 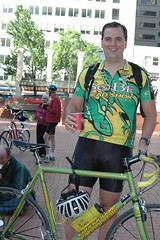 Kevin Wagoner rode in from Southwest Burlingame and stopped for a cup of coffee on his way to work at Con-way in Northwest. Kevin has been commuting for about four years now and rides on the weekends with the Portland Triathlon Club. He heard about the event from co-worker and local racer Doug Shanks. Doug has worked to promote bikes and bike commuting and has even held bike clinics in their office.

Speaking at the event were Evan Manvel of the BTA and Jay Graves, owner of the Bike Gallery. Evan commented that the sunny weather has caused a big problem for cyclists in Portland…bike congestion! He said, “Let’s hear it for bike congestion!” 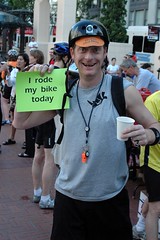 Jay’s talk was cool too, but the best thing I heard from him was news about Oregon getting a “Share the Road” license plate! Turns out that the BTA is working with a “super-volunteer” to move the process forward. I’ve got the name of this secret operative and I’ll post all the info very soon.

And just in case anyone had too much fun and stayed too long, the City was handing out tardy slips. If you didn’t make it out to the party, you can always check out Friday’s Bike Commute Day in the Lloyd District.

Catch up on all the fun photos in my Bike to Work Day gallery. Also check out Dat Nguyen’s masterful images of the event.

I didn’t get Dat’s permission for these, so don’t tell him.

I enjoyed the ride in this morning. But I thought it was supposed to be more of a group thing. The “triathaletes” sure didn’t want to wait for us. 🙁

Whose brilliant idea was it to have this on a DIFFERENT day from the Lloyd event? I feel especially bad for the speakers, who did not seem to have much of an audience.

Evan will have a chance to be heard again on Friday, 8:00 am, at Oregon Square Park, NE Holladay between 7th and 9th.