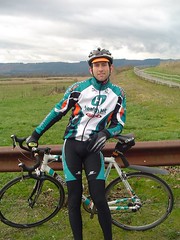 Yesterday I met up with pro bike racer, Doug Ollerenshaw. Doug is a Portland native and races for Health Net/Maxxis, one of the top teams in the U.S.

Long time BikePortland.org readers might remember hearing about him last April when I reported on his epic victory at the Sea Otter Classic race down in California. You also might have seen him at the Twilight Criterium which took place downtown last August. 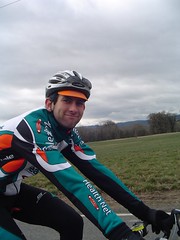 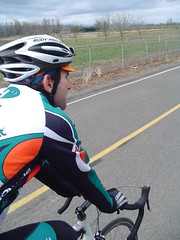 A few days ago I noticed he’d registered in the Forums so I dropped him a line and he suggested going on a ride. I’d never ridden with such an established pro and since I hadn’t been on a real (spandex-clad) ride for a long time I didn’t quite know what to expect. Luckily for me, Doug was just out for an easy spin and he had no intentions of pushing the pace. He’ll have plenty of hard rides in the coming months.

Doug’s season just started last weekend with the Cherry Pie Road Race but that is just a tune-up to much bigger things…like his planned trip to race in Europe this May and the Tour of Taiwan which starts in early March.

2006 will definitely be a big year for Doug. In addition to just purchasing his first home (a “shoebox sized” condo in NW Portland) he’ll continue his rise as a top U.S. racer. You can keep up with his adventures on his brand new website, DougOllerenshaw.com.

Best of luck Doug! We’ll all be rooting for you back here in Stumptown.

also: nicest guy ever (in contrast to lots of pdx bike racers with huge egos and attitudes)

And doug is mechanical engineer to boot, with a undergrad and masters degree! Go Doug !

NO WAY!! This guy passed me on my commute to work yesterday afternoon. I remembered thinking hmmm I bet that guy is a Pro. How weird.