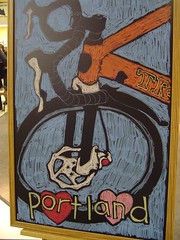 Get most of Portland’s bike advocates in one room, add free food and drinks, throw in a few city commissioners, and top it off with a couple congressman and you’ve got the recipe for some real bike lovin’.

An exciting cross-section of the bike community got together at the Bike Gallery last night to pat ourselves on the back and look forward to a major push for Platinum. It was cool to have all that bike energy cramped together…you could really sense the enthusiasm and potential in the room. 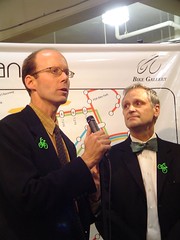 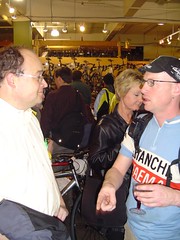 I couldn’t help but feel all warm and fuzzy when Congressman Earl Blumenauer took the stage and said we’re in the middle of a “national bike renaissance,” and that “the bike is an indicator species for the livability of a city.”

His comments were followed by Congressman Peter DeFazio saying he wants to “make the state of Oregon the #1 state for cycling, attracting people from all over the country and the world.” He also promised to try and find money in the next transportation bill for an off-highway bike path in the Gorge that would connect the Dalles to Portland. This is a serious project that DeFazio and folks from Cycle Oregon are hoping to complete by 2016, the 100th anniversary of the Columbia Gorge Scenic Highway. Now they’ve just got to find about $50-70 million bucks lying around to make it happen.

Next up was Sam Adams doing a bit of cheerleading for the city’s big push to achieve Platinum status. He spoke about the importance of filling gaps in the bikeway network and making bikes appeal to everyone in the city. They’re hoping that we can get to a point of making 15% of all trips by bike…that’s a pretty lofty goal, but Sam says “we can do it with your help” and (this is my favorite part), “we got your back at City Hall.”

But it wasn’t just about the big politicians in the room. I’m still smiling about the fact that I got to introduce one of Portland’s most veteran bike messengers to several key people in the Office of Transportation. This is exciting for me because messengers desperately need to have more say in transportation planning decisions and I think their voices need to be heard. Stay tuned for more on this issue.

I met all sorts of interesting folks and had great coversations with lawyer Ray Thomas about exciting new legal developments (stay tuned), I met the City’s new transportation planner (he loves bikes!), got to know Trek’s Brand Manager, and even met a soon-to-be circuit court judge. Lots of fodder for future posts!

Portland is poised to make some huge strides in the months and years to come. It’s going to be a great ride and hope you can join us!

Check out the rest of my photos.

Sounds like it was fun. Funny picture of Dabby chumin’ it up! 🙂

Thanks for putting together a great article and photo shoot of the Trek/Platinum event at downtown BG. Sorry I missed it…looks like a good time and some positive buzz.

glad you got the photos, i had class till 8:30 and wasn’t able to make it.