“A lot of us are of voting age and we can run for office soon – if leaders aren’t taking climate action seriously, they’ll lose their jobs.”
— Ukiah Halloran-Steiner

Come to the Climate Strike just wanting to skip math class, leave riled up and informed about freeway expansions and corporate villains. The organizers behind today’s Portland Youth Climate Strike (PYCS) protest want to get people involved in climate action however they can.

Thousands gathered at today’s march, walking as a group from Portland City Hall across the Burnside Bridge before stopping at Revolution Hall where they were greeted by attendees of the Portland Climate Festival. The goal of the strike was to take aim at Portland’s ‘climate villains’ and build the climate movement. The energy was potent – aided by hundreds of creative protest signs and some costumes, as well as some much-needed sun overhead – and organizers hope it will lead to progress.

Since the last climate strike in Portland, the youth climate movement here has only grown. The youth-led campaign against the Oregon Department of Transportation’s Rose Quarter Freeway Expansion has made national headlines, stirring up powerful conversations about the impact of freeway expansions that were previously niche and firmly in the adult domain.

So, even though this year’s strike didn’t gather as many people as some in the past, organizers think it made an impact.

Adah Crandall, who organizes with the Youth vs ODOT campaign and helped plan this protest, told me she sees this strike as being a catalyst to something bigger.

“The one in 2019 was bigger, but I think this one was more intentional,” Crandall said.

When I talked to Ukiah Halloran-Steiner, another member of Youth vs ODOT who also helped organize this year’s strike, she said she’s excited to see how many people are willing to join the ranks to demand action.

“It’s really just about seeing how many people are mobilizing and putting pressure on politicians to take bold climate action. A lot of us are of voting age and we can run for office soon – if leaders aren’t taking climate action seriously, they’ll lose their jobs,” Halloran-Steiner said.

One of the purposes of this march was to have local politicians sign a pledge promising to lead on climate action, and take actions like opposing “new investments in fossil fuel production and infrastructure at every possible opportunity.” 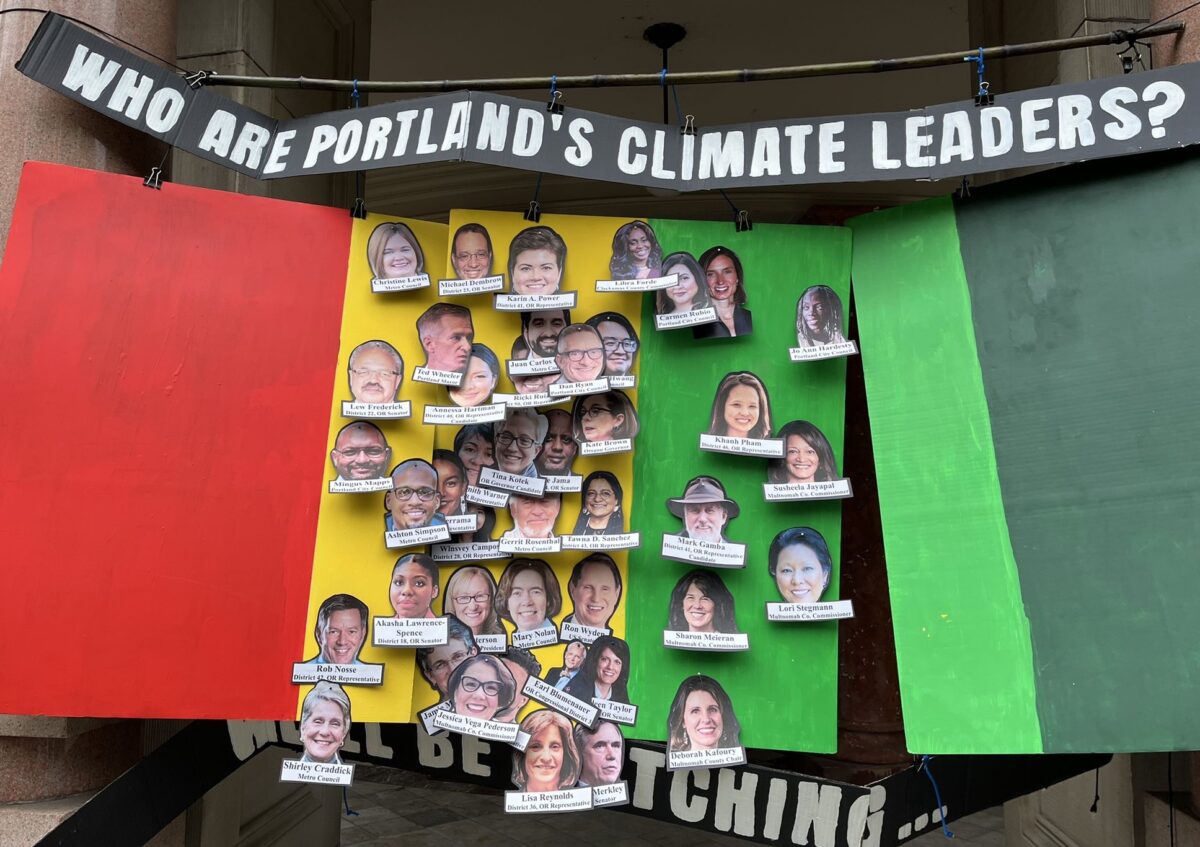 Halloran-Steiner said she hopes everyone who signed this pledge votes to oppose freeway expansions like the Interstate Bridge Replacement Program, which aims to expand I-5 from Portland to Vancouver across the Columbia River. She also hopes more adults will go from merely supporting the youth, to protesting with them. “Young people are supposed to be out living their lives,” Halloran-Steiner said.

While teens headed the group, there were plenty of adults in the crowd. Among them were members of nonprofit advocacy group Bike Loud PDX, who joined the ‘bike corking’ team to help block off the streets from people driving cars so people participating in the protest can get through safely.

And although many of the youth leaders have been focused on transportation reform, ODOT wasn’t the only subject of the PYCS participants’ ire. Along with the department of transportation, the group also came out against other ‘climate villains’: fossil fuel utility company Northwest Natural, crude oil storage and shipping company Zenith Energy, and the Portland Business Alliance, which protesters say has lobbied to prevent local climate action.

During one point in the march, Grant High School teacher Suzanna Kassouf (above) took the megaphone to give a quick rundown on NW Natural, saying the company uses greenwashing tactics to make it seem like their product isn’t contributing to carbon emissions.

“There is no such thing as renewable natural gas,” Kassouf said. “NW Natural: we’re going to take you down.”

Michael Fairhurst, who is a member of the climate action group Extinction Rebellion, spoke about the Portland Business Alliance (PBA) outside their building, asking them to take accountability for financially supporting polluting projects, especially regarding their involvement with the Portland Clean Energy Fund.

“There are no profits on a dead planet,” Fairhurst said, addressing the PBA.

After the march, people were invited to the Climate Festival at Rev Hall, where they could hear speakers and listen to live music. Environmental groups like 350 PDX, 1000 Friends of Oregon, Beyond Toxics and No More Freeways had booths set up where people could learn more about their missions and get involved.

To Danny Cage, a youth activist who spoke at the beginning of the festival, one of the purposes of a gathering like this is to show people they’re not alone.

“You are supported in your fight for climate justice,” Cage said.

According to some experts the tipping point as already passed. Lack of action in the face of catastrophe says nature is finally addressing the planet’s human overpopulation problem. Fascinating times ahead.

Speaking of which, lots of maskless and even more wearing their masks completely wrong. Isn’t this what was once called a super-spreader event? Nature hard at work.

David, haven’t you heard? The $cience is clear.

What are referring to? The science was clear and because a bunch of Trump nitwits did not get shots the pandemic lasted a year longer than it should.
The Science was correct.

This ridiculous comment gets 10 likes? The pandemic is over, we can declare victory if you got a shot..,, There is no mask mandate at present at all in Oregon, David, why would they wear one and why would you comment on it in May 2022..
The Trump cult fans madness never ends….

Climate change seems to share something in common with COVID and masking. The “science” you believe depends whether you’re a progressive or conservative. Everything is settled science on both fronts to progressives while ignoring the fact there are reputable scientists who disagree that we’re facing impending climate doom & gloom. Same goes for the effectiveness of mask mandates when over 90% of Multnomah County is vaccinated. It’s no wonder many politicians to the right of the far left are paying no attention to these protests. Cue the science denier & bleach drinking MAGA quotes in 3 … 2 … 1

Does it really make sense to give more weight to the 1% of scientists arguing one interpretation of the evidence compared to the other 99%?

There are lots of things we can do now that will be good for us even if climate change turned out to be less severe than almost every scientist is projecting, such as reducing our use of fossil fuels which have numerous problems besides emitting CO2.

If you are arguing we should do nothing because a fringe group says the end of modern civilization might not actually be at stake, then you are making a pretty weak argument. You’ll have to do better.

More like NW Natural’s corporate competitors in the energy sector hired a large PR firm like Hill and Knowlton to organize an AstroTurf youth activist group in order to gain free media to punish its competitor.

Chris I
Reply to  Tom Busse

Who are their competitors in the energy sector? PGE?

I commend them for holding a large rally without brawling, smashing windows, or setting dumpsters on fire. I hope Portland’s more “professional” protestors will learn to do likewise.

If only street theater fixed climate change! Unfortunately the only thing that will appease the sun god are the still beating hearts of woke virgins.

Also the phrase “climate justice” cracks me up. What does that even mean? It just seems like a “cool” mashup, with an explanation retroactively applied.

Seems like a good excuse for the usual actors to show up and be seen. The kids aren’t accomplishing much but at least they are trying to burn down police stations.

A few more photos from the event, some showcasing BikeLoud PDX’s work in carrying the sound system and corking for the event.
https://www.facebook.com/media/set/?set=a.1623375604700258&type=3