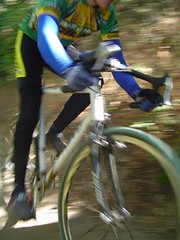 Saturday night is the Cross Crusade party and awards ceremony. It’s happening at Mountain Cycle/Kinesis (3808 N. Williams). I heard last year there were 400 people in attendance and given the burst in popularity of ‘cross in Portland one can only expect it to be bigger and crazier this year.

The Cross Crusade folks have a lot to celebrate. They’ve established themselves as the premier cross series in the country. According to numbers given to me by OBRA’s Candi Murray, they had 3390 racers in just 6 races this year. They also had over 300 new members sign up just for ‘cross. Those are big numbers folks.

And there’s still more racing to be done. Veloshop (who kicked things off in Hood River) just announced the final race of the season. Should be a blast and it’s at Blue Lake Park which is a nice ride from the city. Hopefully it snows, that would be a fitting end to an epic year.

Last year, the line for beer was at least 20 minutes. And that was serve yourself….

the party last year was great but maybe BYOB if you want to have a cold one in your hand…the line was very long and unforgiving.