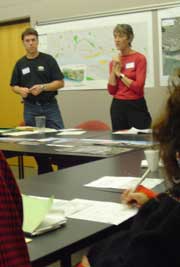 The trail would be part of the North Reach portion of the City of Portland’s ambitious River Renaissance Initiative.

According to trail advocate Pam Arden:

“The attendance and response showed there is more than casual interest in the prospects of a trail that would connect North Portland to the central eastside.”

And Friends of the Greenway member Scott Mizee said:

“Many things have fallen into place over the past year that align with our goals for this trail. This further strengthens our commitment to building a multi-modal path connecting the St. Johns Bridge and the Eastbank Esplanade. We strongly believe that this will be a win/win situation for the city, its industry and its residents.”

The Friends of the NoPo Willamette Greenway Trail are excited about the future but they need your help in making this trail a reality. If you’d like to get involved, stay tuned to this site for updates or email Pam Arden or Scott Mizee for more information.

One segment of this vision is funded and will, we hope, get built in 2006, the Waud Bluff Trail. It will connect Willamette Blvd. at Harvard with the cul-de-sac at the north end of Basin Avenue in the Swan Island Industrial Area. The route is currently an abandoned service road and is heavily used by Swan Island employees, US Coast Guard personnel and U of Portland folks. The new trail will be a full width bike/ped facility with a bridge over the railroad line where trains are now parked on occasion. The project is funded with ODOT Transportation Enhancement funds secured by the City’s Parks Bureau. Contact Gregg Everhart at pkgregg@ci.portland.or. or Lenny Anderson at sitma@teleport.com to learn more.

Thanks for the update on Waud Bluff Lenny. I also posted something about this back in April. Great work in making it happen and I can’t wait to ride it!

Jonathan, do you have contact info for the Friends group if we’d like to attend future meetings and/or stay abreast of this exiciting prospect?

You may contact me on my cell phone 971.235.0249. or Pam Arden at 503.708.4697
Or you may e-mail either of us from the link in Jonathans posting above. I have also manually entered our addresses here:
scott_mizee@hotmail.com
pam_arden@hotmail.com

If you send me your e-mail address, I will make sure I get you on the list for all future communication!

I like to ride along the bluffs of Willamette, both on the road and off of it.
I also ride down along the tracks, and down by the superfund (could be Superfun?) site area.
I was reading about U of P buying some of this land and the access roads involved.
I have also heard of people being kicked out of areas recently, by people connected to U of P.
Is there any hope of connected, accessabile trails down along the superfun site areas, as this plan comes along?
I believe this may be what you are talking about already, but I wasn’t sure. I know new ball fields and such will be going in down there….
I have always thought of U of P as a great school. Crap, I have skated a ramp put up on school property there. They seem to be quite tolerant, and into fun. For some reason I think I even saw Steve Miller play there…. Though this sounds wierd, even to me.
Did I mention I like to ride my bike?

I guess maybe I should clarify that I am talking about the possibility of great Off Road acess through this area.
A paved trail would be great, but could possibly negate, or ease in the closure of some fun off road riding down there.
We all know how easy it is too say, well, you can ride over there now, so, you don’t get to ride here anymore.
I still like to ride my bike though…

Please submit your comments on the River Plan Concept draft before they are due December 1st. The draft document handed out at the first community meeting of Friends of North Portland Willamette Greenway contains specific concepts for the North Reach beginning on page 10. There were many ideas suggested at our meeting, and these ideas are important to communicate directly to the River Plan Team at Portland’s Bureau of Planning riverplan@ci.portland.or.us The River Plan Committee will take action on the draft plan December 12th and forward their recommendation to the Planning Commission for adoption. The River Concept Plan will be a guide for planning decisions leading to changes in the zoning map, zoning code, design guidelines that regulate private and public development, and other implementation strategies–including public funding. Our comments in support of trails and related amenities are key for the vision of a North Portland Willamette Greenway Trail. If you want to fish from a dock on the North Portland Greenway, now is the time to let the planners know. If you want to reduce the amount of exhaust fumes you have to inhale on your morning bike commute, now is the time to act. Friends of North Portland Willamette Greenway would like to know about your input, so when you email a comment, please cc pam_arden@hotmail.com and scott_mizee@hotmail.com

Check out our new blog.

——–JANUARY 19, 2006 north portland, oregon, usanpGREENWAY will hold its next public meeting on January 31st at the Kenton Firehouse at 7:00PM 8105 North Brandon. You will find the Firehouse 6 blocks north of Lombard and 1 block west of Denver Avenue at the corner of Schofield and Brandon. It is also home of the North Portland Tool Library and across from the Kenton Post Office.