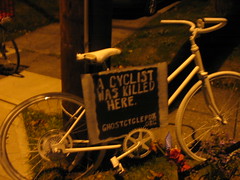 Last night, five ghost bikes were placed in four locations around the city. Eight cyclists showed up in SE Portland to load their bike trailers with the white bikes, signs and tools to install them. According to reports, onlookers were very curious and everyone was supportive.

Here’s a quote from someone on the ride:

“Ghost bikes are something I had wanted to get going a long time ago…I must say it felt so good to see the bikes installed, I felt a great deal of relief actually, I had been searching for a way to make a difference and at last it was happening.”

The group behind the effort has just posted a temporary website at GhostBike.org.

Check out some photos of all the ghost bikes installed so far.

Thank you to Forrest and everyone else for the ghost bikes around town. The one on Sandy Blvd at 37th is especially visible. Very well done!

thanks Bob. I\’ve fixed the link.