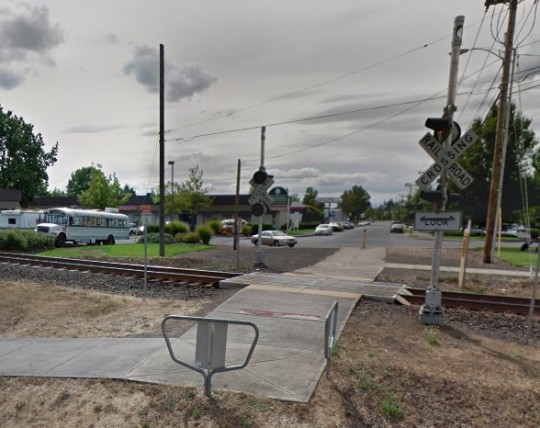 A man riding a bicycle was involved in a collision with a TriMet WES Commuter Rail train south of Tualatin this evening. It happened just before 5:30 pm. 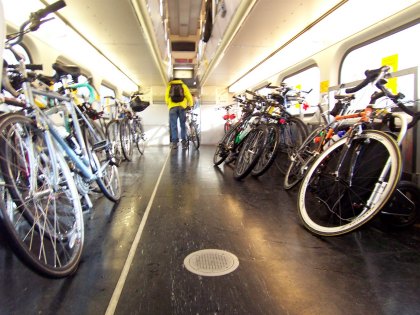 TriMet has purchased two new railcars for its WES line that have a large storage area inside, similar to this one used by Caltrain as a bike car.
(Photo © Todd Boulanger) 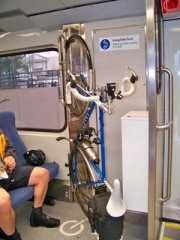 TriMet announced today that they have removed four seats in each of their WES Commuter Rail cars in order to make more room for bicycles. When WES opened back in January, the cars only had two designated hooks for bicycles, leading to immediate concerns from multi-modal commuters.

The issue has been on TriMet’s radar since mid-February when TriMet’s executive director of operations Steve Banta brought up the issue at a board meeting. The issue Banta raised is how to deal with the Federal Railroad Administration regulations that the WES must meet. Unlike MAX, FRA regulations say that any object that can fly and hit someone must be secured (whereas on MAX, it is OK to just sit with your bike, on WES it must be secured with a strap or hook). 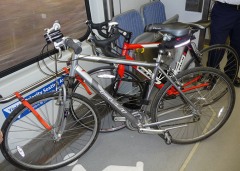 When TriMet’s WES commuter rail line between Wilsonville and Beaverton opened back in January, many bike commuters were concerned about the lack of onboard bike capacity. WES had only two bike hooks per car, compared to four hooks on MAX trains.

One reason for this is because WES, unlike MAX, falls under the “commuter rail” category and as such, is regulated by the Federal Railway Administration (FRA). As TriMet GM Fred Hansen clarified in a TriMet Board meeting where the topic came up in February, “there’s a different set of requirements” for how objects must be secured on commuter rail trains.