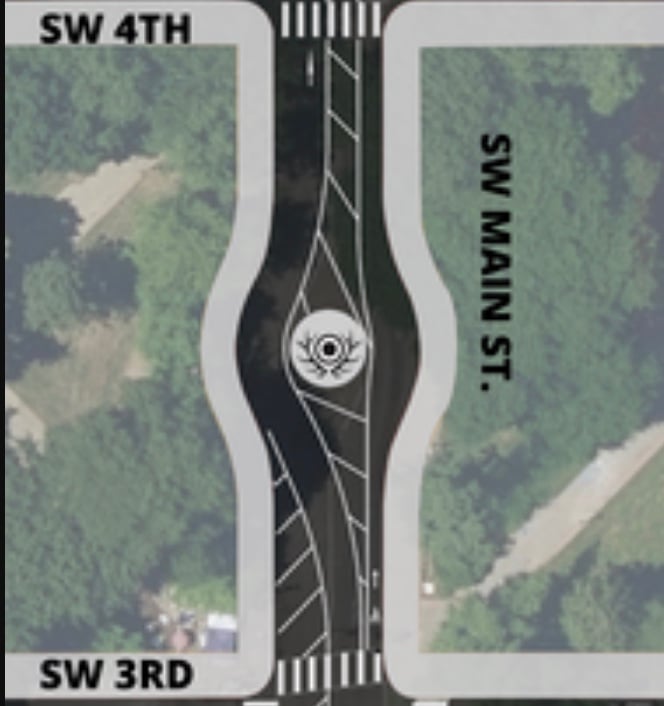 After months of speculation and back-and-forth at City Hall, the Portland Bureau of Transportation just announced they will stripe a bike lane on SW Main between 3rd and 4th avenues. This is the block where the Thompson Elk Fountain and statue had lived before it was removed following damage it sustained during protests. There was urgency to create a bike lane here because the current bike facility ends at 3rd, which would leave a short but significant gap from the projected bikeway couplet PBOT is building on 4th and on Broadway.

With limited road space and the presence of the Elk Statue, some people thought we’d have to choose between a beloved icon and much-needed bike lanes. Thankfully, City Hall has figured this out. Here’s an excerpt from PBOT’s statement:

“Interim striping on SW Main Street will extend bicycle facilities from SW Third Avenue to Broadway, closing another gap in Portland’s bike network, and improving access to Portland State University, Portland City Hall, and the South Park Blocks. The work on SW Main Street will support the return of the Thompson Elk Fountain and related streetscape improvements currently under exploration by the Portland Parks Foundation.”

The SW Main project was announced along with the great news that PBOT will begin construction of the $750,000 SW Broadway Bikeway Improvements project next week. As we shared back in April, this project will finally connect the bike route between the Broadway Bridge and Portland State University. The design will mimic what was already installed between Hoyt and Oak in late 2020.

To further improve Broadway, PBOT also announced today that the block of SW Main adjacent to the Arlene Schnitzer Concert Hall will be permanently carfree and turned into a public plaza. This block had been routinely off-limits to cars at specific times and days, but this would be a full-time driving prohibition in order to, “create an outdoor public space for events and programming,” related to the cultural district.

Also of note is that PBOT says drivers will no longer be able to turn right from SW Main onto 4th. And between 4th and 6th, PBOT will reduce the number of driving lanes from two to one in order to make space for a bus and bike lane. Check graphics below for details:

It’s more good news about Portland’s transportation system! With the opening of Better Naito, the Blumenauer Bridge, and other many other projects, PBOT continues to change Portlanders’ relationships to our streets for the better. The new plaza on SW Main also helps fulfill a promise of PBOT Commissioner Jo Ann Hardesty to add more carfree streets downtown.

Learn more about the SW Broadway project on PBOT’s website.