**The path has been closed as of Saturday 3/25. See below for update and statement from Portland Parks & Recreation bureau.

The City of Portland Parks and Recreation bureau says the floating portions of the Eastbank Esplanade could close if water levels in the Willamette River continue to climb.

Here’s the problem: The section of path just north and south of the Burnside Bridge is tethered to the riverbank. The ramps that lead down to the floating path are fixed. Therefore, as water rises, the path rises above the ramps, creating a sharp incline as seen in the photos above. END_OF_DOCUMENT_TOKEN_TO_BE_REPLACED 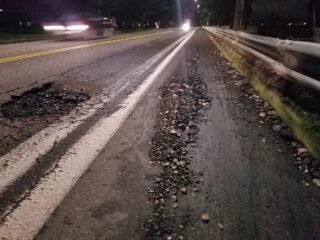 Double-whammy. A pothole on N Willamette deposits gravel into the bike lane.
(Photo: @Dcay via Twitter)

As if the snow and ice and gravel wasn’t enough — now we are dealing with the scourge of potholes.

Potholes are nothing new, but this winter’s storm has created an alarming amount of new ones. They’re everywhere! Old ones are bigger and more treacherous, while new ones creep up where and when you’re not expecting them. For people using a car, a pothole can damage your wheels and rims. But for people on a bike the risk is greater. In addition to equipment damage, potholes can lead to crashes and injuries.

Today the Portland Bureau of Transportation (PBOT) announced what we hope will be a salve for our wounded streets: “Patch-a-thon” is the city’s new initiative that will aim to attack potholes with more maintenance crews. Here’s more from the official statement:

“Starting tomorrow, the Portland Bureau of Transportation (PBOT) will launch Patch-a-thon, a new initiative to fill the numerous potholes caused by this season’s many winter storms.
END_OF_DOCUMENT_TOKEN_TO_BE_REPLACED

Gravel, gravel everywhere. On the left is the short raised cycle path on SE Division east of 82nd. On the right is the bike on on SE 52nd at Clinton.
(Photos: J. Maus/BikePortland)

We hate to complain; but this situation is not new. It’s also dangerous and we haven’t seen significant steps taken to improve it even though it has been on the City’s radar for many years. We’ve documented hazardous post-storm cycling conditions (and PBOT’s response to it or lack thereof) in 2007, 2008, 2009 and 2014.
END_OF_DOCUMENT_TOKEN_TO_BE_REPLACED