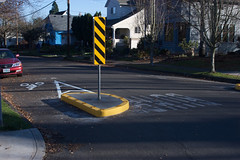 In our coverage of the new bike boulevard on Spokane Street in Sellwood many of you have shared questions and concerns about the new “channelizer” islands that have been installed. The islands are meant to channel motor vehicle and bike traffic into specific areas at intersections to avoid pinch-point conflicts, but several readers have said they don’t plan on using them and others say they actually increase danger for people on bicycles.

Here’s how one commenter responded to them:

These channelizers are wonderful until you hit one at night and crash your bike and break your ribs. Like I did. What the hell are they supposed to do? I’ve been using this street for years and nobody warned me that someone would be pouring twenty tons of concrete in my path. 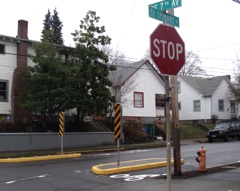 On Saturday, the City of Portland hosted a party and bike ride on SE Spokane Street in Sellwood to celebrate the opening of a new bike boulevard. The project’s significance goes way beyond the speed bumps, “channelizers”, and other infrastructure changes and marks what the Bureau of Transportation calls the “next generation” of bike boulevards in Portland.

PBOT unveiled plans for the Spokane Bike Boulevard nearly a year ago and we took a closer look at how the project was shaping up earlier this month. 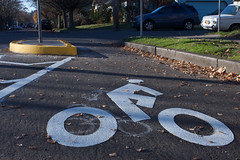 The City of Portland Bureau of Transportation is just weeks away from unveiling one of the most important bike-related infrastructure projects in years. Their new bike boulevard on SE Spokane Street in Sellwood is the first of their “next generation” bike boulevards and the first of 60 miles of bike boulevards they have planned for completion between now and 2013. 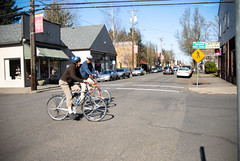 PBOT has made major safety improvements
to this crossing (SE 13th and Spokane).
(Photo © J. Maus)

The Sellwood Bike Boulevard project is nearing completion and the neighborhood wants to celebrate. The Sellwood Moreland Improvement League (SMILE) will host a bike ride and party on Saturday December 19th to welcome the City’s first “next generation” bike boulevard. 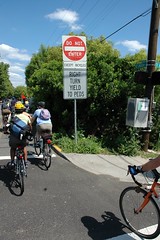 The City of Portland is about to embark on a series of open houses to inform neighborhoods about their bike boulevard plans.

The Bureau of Transportation (PBOT) is busy planning and designing 15 miles of new, low-traffic streets throughout the metro area. PBOT has planned two open houses for each of the six neighborhoods/districts where the bike boulevards are planned.

Last night at the headquarters of the Sellwood-Moreland neighborhood association, about 50 residents showed up to learn more about the City of Portland’s plans to create a bicycle boulevard on SE Spokane Street.

They got a chance to see some of the latest innovations in the city’s toolbox for creating successful bike streets that co-exist with the livability and business needs of the surrounding neighborhoods.