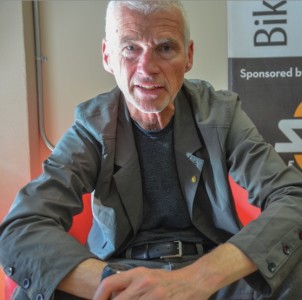 Rick Browning back in May.
(Photo: M. Andersen/BikePortland)

Rick Browning, the veteran architect and urban planner that was hired back in May to lead a high-profile bike project, is no longer working for the City of Portland. 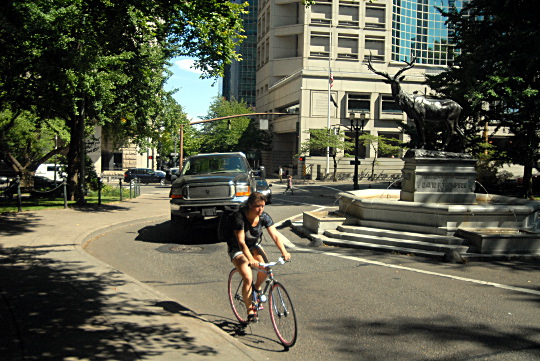 The bike route west from the Hawthorne Bridge.
(Photo: M.Andersen/BikePortland)

This July, when downtown workers start grabbing big orange bikes to head across the river for lunch at Olympia Provisions, many will make an unpleasant discovery: Downtown Portland has hardly any bike infrastructure. 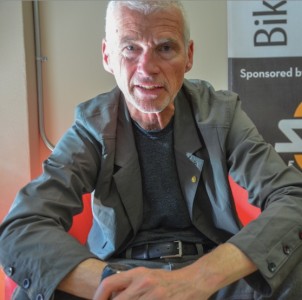 Rick Browning, the new project manager for the
Central City Multimodal Safety Project, stopped by the
BikePortland office for a chat Tuesday.
(Photos: M.Andersen and J.Maus/BikePortland)

Rick Browning is already a big part of Portland as we know it. His fingerprints are on everything from the streetscape reconstruction that helped make inner Alberta Street a regional destination to the transformational 1999 widening of the Hawthorne Bridge sidewalk to the bike path that leads straight into our airport’s terminal.

This morning, he started a job working on one of the most significant bike projects of his career: one or more protected bike lanes across downtown Portland.

As we reported earlier this month, downtown is probably the most bike-intensive part of the city that has almost no all-ages bike infrastructure. But what else will the project include, and how will he help the city navigate the many obstacles to change? We sat down with Browning Wednesday night for an advance look at his idea of his mission, the decisions he’ll need to help make and whether downtown bike infrastructure should be a priority at all. 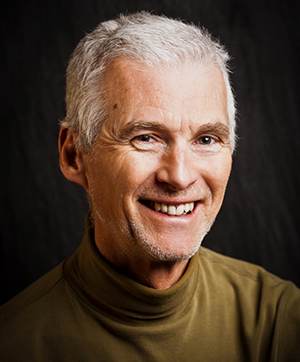 The project management gig that one local planning pro has referred to as the “job of the year” has been filled.

Rick Browning, an architect and urban designer with a long history in Portland, will start work May 28 on a federally funded project that’s widely expected to implement the first substantial protected bike lanes in downtown Portland — indeed, some of the only low-stress bike infrastructure in downtown, which has by far the city’s highest concentration of bike commuters.

The $6.6 million Central City Multimodal Safety Project might also look for ways to improve the awkward bike connections to bridges like the Burnside, Steel and Hawthorne or even crossings of Interstate 405 to the west.

As it has been in other U.S. cities over the last few years, the downtown protected bike lanes would be a companion project to a planned bike sharing system that the city continues to say will launch in 2016.